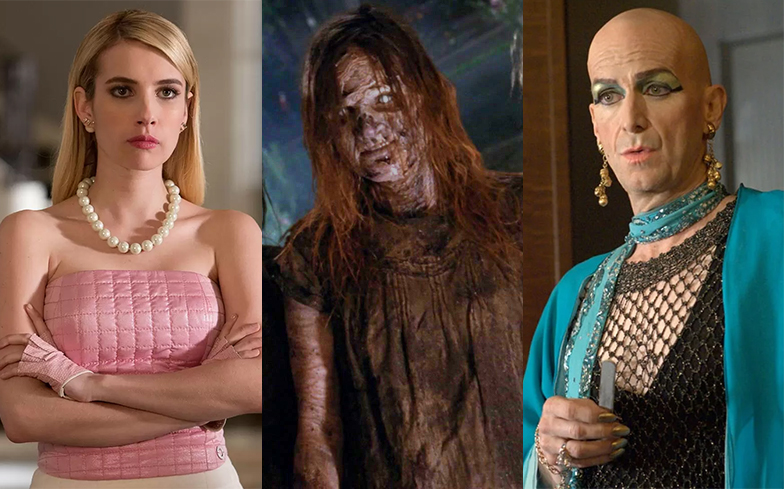 Are you ready for American Horror Stories?

TV mastermind Ryan Murphy has been terrifying viewers with his hit anthology series American Horror Story for almost a decade now, with each season taking on a new theme from an asylum to a witches’ coven and even the end of the world.

Now, he’s announced a spin-off series called American Horror Stories. Instead of a new theme each season, there will be a new theme each episode (think Goosebumps but for grownups), which will likely allow for more obscure concepts we haven’t seen before.

It also leaves the door wide open for fan favourite stars like Jessica Lange and Lady Gaga (and the recently rumoured Ariana Grande) – who may struggle to find the time to commit to a whole 10-episode season – to return for one-off episodes.

We’ve rounded up 8 themes we’d love the show to tackle, including many themes that fans have been requesting for years.

For longtime fans, this is perhaps the most obvious choice. Despite being a horror staple, aliens have only appeared in one season of American Horror Story – Asylum, where Kit Walker (Evan Peters) was abducted and experimented on – and viewers were left a little disappointed as there were many unanswered questions about them. There’s so much potential here, and while Ryan has seemed reluctant to give aliens a whole season, a one-off episode would be a great way to please the fans.

Viewers were introduced to the idea of Artificial Intelligence during American Horror Story’s eighth season, Apocalypse, with the revelation that Kathy Bates’ sadistic character Miriam Mead is actually a robot. Netflix series Black Mirror has been championing technology-based horror for years now (and doing it very well), but we’d love to see how Ryan and co. would tackle this kind of theme with their blend of camp and horror. A solo episode would be a great way to test the waters.

One of the most terrifying aspects of American Horror Story’s sixth season, Roanaoke, was the introduction of the cannibal Cain family, who kidnapped Lee (Adina Porter), Monet (Angela Bassett) and Audrey (Sarah Paulson) and tortured them. Considering the amount of cannibal films we’ve been treated to in the past few decades – Wrong Turn, The Hills Have Eyes, Raw, The Green Inferno – we think it’s about time they got their own standalone American Horror Story moment.

We’ve been introduced to several ghosts throughout the series, most memorably in Murder House, Roanaoke and 1984, but imagine seeing how it would play out at sea? It’s an idea that’s been thrown around a few times, and fans have expressed desire for this to be explored. It’s been teased that the recently-delayed 10th season of American Horror Story will have a water theme, so it could very well be this, but if it doesn’t get a full season we’d love to see a one-off special.

Fashion icon. Keeper of secrets. Connoisseur of oversized earrings. Liz Taylor (Denis O’Hare), the trans bartender at the Hotel Cortez, is many things, but most importantly she’s a firm fan favourite (and we ranked her one of the best characters in the show’s history). Standalone episodes would be the perfect format to flesh out some of American Horror Story’s more engaging characters, and Liz would be perfect for this. We’d also love to see what Nan’s getting up to in Hell, and maybe get some back story on villainous characters like Sister Jude or Fiona Goode (basically, just give us Jessica Lange).

Okay, so maybe this is bending the rules slightly, but given that American Horror Story and Scream Queens were both created by Ryan Murphy, they both aired on the same network, and both featured many crossover stars like Emma Roberts and Billie Lourd, how amazing would it be to see a one-off comeback for the cult classic series? Fans have been non-stop asking for the show to return since it was cancelled in 2016, and Ryan himself has hinted that he’s working on it. If a full Scream Queens revival isn’t possible, a one-off American Horror Stories episode starring the Chanels would be a great bit of fan service (and would confirm years of theories that the two shows exist in the same universe).

One potential theme fans have latched onto based on the penultimate episode of American Horror Story: 1984 is the idea of urban legends. As well as a reporter bringing up “Bigfoot, aliens, the Loch Ness Monster, all of that Leonard Nimoy In Search Of shit”, we also saw Mr Jingles get dragged into the lake at Camp Redwood by a mysterious monster who was never explained or heard from again. Sure, it was an homage to the final scene in horror classic Friday the 13th, but it could also be a hint at an urban legends theme, Creature From The Black Lagoon-style. If this isn’t explored in season 10 of American Horror Story, we’d love to see several urban legends get their own one-off episodes in American Horror Stories.

American Horror Story: The Walking Dead? Surely it’s about time? The series briefly explored zombies in the third season, Coven, when the witches of Miss Robichaux’s Academy were targeted by voodoo queen Marie Laveau. The prosthetics were incredible and they were genuinely quite terrifying, so we’d love to see a whole storyline dedicated to them.