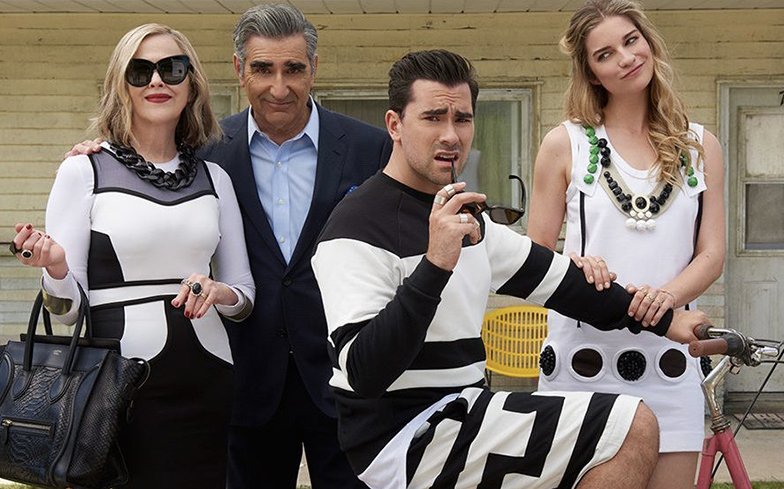 Have you ever looked at someone so obscenely rich that they’re completely oblivious to how the other half live? We can’t relate. But Schitt’s Creek does a hilarious job of exploring exactly that.

If you haven’t been paying attention to internet culture, you might have missed this gem (available to binge in full on Netflix) but the chances are you’ve probably heard someone talking about it, or at the very least heard someone call out ‘eww David!’ at the smallest inconvenience.

Created by father/son duo Daniel and Eugene Levy (of American Pie fame), the show follows a filthy rich family as they’re stripped of their wealth and forced to live in a run down town they bought as a joke, but are allowed to keep because it’s deemed to be of no value by the bailiffs. Hilarity ensues.

If you’re not already on the hype train, here’s five reasons you need to watch Schitt’s Creek.

Once you’re three or four episodes deep you’ll forget how ‘David’ was ever pronounced in a pre-Schitt’s Creek world.

On the subject of Alexis, this song she released while was a rich bitch had us equal parts cringing and yet longing for a full release. The show came through and gave us what we wanted. Is it absolute bilge? Yes. Are we obsessed? Also yes. Check it out below.

The depth and breadth of Moira Rose’s wardrobe and wig collection knows no bounds, and every time she appears on screen there’s something new to scream at. Her wardrobe’s so physically small we’re not sure from where she keeps pulling these iconic looks from, but we’re glad she does. Here are three of our favourite looks, be rest assured there are PLENTY more. The ‘I’m the singer for an Elizabethan screamo band’ look …and her one liners

If we’re not creasing at Moira’s bizarre wig collection (that she keeps nailed to the wall), its her one-liners and liberally artistic pronunciation. Catherine O’Hara is truly the star of the show, because every time she opens her mouth something iconic and infinitely quotable comes out.

David comes out as pansexual early on in the series, in the most casual way possible that has changed the way we talk about wine and sex forever. No one on the show really bats an eyelid when (spoiler alert) David finds himself in a relationship with one of the local guys. We recommend you watch and enjoy this moment for yourself, but check out the exchange below.

Stevie: So, just to be clear… I’m a red wine drinker.

Stevie: Okay, cool. I only drink red wine. And up until last night, I was under the impression that you, too, only drank red wine. But I guess I was wrong?

David: I see where you’re going with this. Um, I do drink red wine. But I also drink white wine. And I’ve been known to sample the occasional rosé. And a couple summers back I tried a merlot that used to be a chardonnay, which got a bit complicated.

Stevie: Oh, so you’re just really open to *all* wines.

David: I like the wine and not the label. Does that make sense?