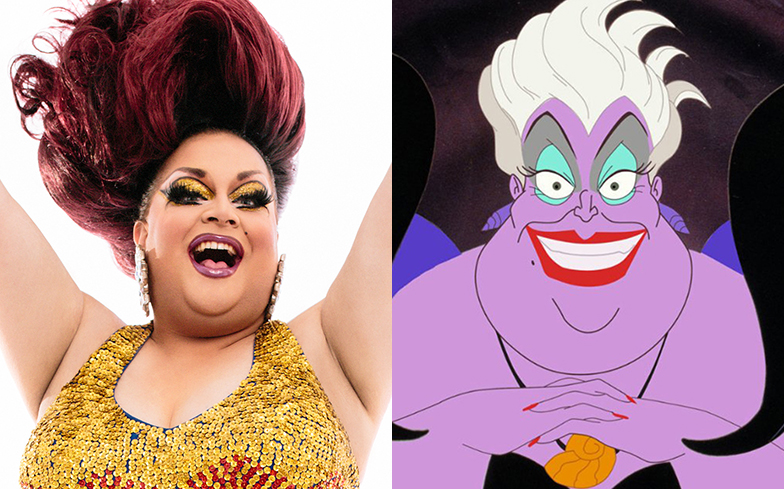 It has to be the Minj.

Over the past few years, Disney have rebooted some of their most iconic animations as live-adaptations for the big screen, including The Jungle Book, Beauty and the Beast and The Lion King, all of which garnered praise and huge box office success.

Next up is The Little Mermaid, which will star Halle Bailey – of the R&B duo Chloe x Halle – as Ariel, with One Direction star Harry Styles rumoured to play Prince Eric and Oscar-nominated actress Melissa McCarthy to take on Ursula.

However, in the words of Michelle Visage: “NO!” While McCarthy is an accomplished actress and has proven herself to be formidable in both comedy and drama, the role should be portrayed by a drag queen.

The original animated Ursula was inspired by American drag icon Divine, purveyor of filth and star of John Waters films like Pink Flamingo and Hairspray – so who better to play the iconic villain than Drag Race alum Ginger Minj?

“If you’re gonna have a drag artist do it, I’m probably one of the most qualified to do it,” she told us in an interview last year. “I can sing and I can act. I think that I should at least be given the opportunity to fight for that role.”

We’ve rounded up five reasons as to why the self-described “crossdresser for Christ” should be Ursula.

She’s an expert in camp and comedy

As witnessed in season seven of Drag Race, Ginger Minj embodies both camp and comedy. In the ninth episode, the queens impersonated characters from some of John Waters’ most iconic films such as Female Trouble and Pink Flamingos. Ginger ultimately won the challenge after impressing as Edith Massey/Edie in one of the latter’s most eggcelent (sorry) scenes. Watch above.

The Minj can SANG

When the glamour toad returned for the second season of Drag Race All Stars, she showcased her incredible vocal prowess in the All Star Talent Show Extravaganza. Although Ginger blessed us with her singing ability in the aforementioned John Waters challenge, this is the Drag Race moment that proved the Minj can SANG. “When people think of Drag Race and theatre queens, they think of Jinkx, Ben and myself,” Ginger explained in our interview. “We’re really the three that they go to. The talent pool of Drag Race is very wide and very amazing, but when it comes to those specific boxes to check, singing, acting and dancing, there’s only a handful of us to do it.” Whoever plays Ursula needs to be able to sing, so…

During Ginger’s Drag Race run, the competitor won three maxi-challenges, all of which were acting based (Glamazonian Airways, Snatch Game and Divine Inspiration). She later made her film debut in Dumplin’, a Netflix original musical comedy starring Jennifer Aniston as a former beauty queen whose self-proclaimed “fat” daughter competes in her local pageant, as a protest to spread the message of body positivity. The film received acclaim from critics – earning a 85% approval rating on Rotten Tomatoes – and Ginger received highly positive reviews for her performance. Ginger also lent her voice to the 2018 Netflix original series Super Drags.

Ursula was inspired by Divine, A DRAG QUEEN

Like we said earlier, Ursula was based on Divine – sporting the star’s signature eye makeup, jewellery and body type – so it’s only fitting that a drag queen assume the mantle in its upcoming live adaptation. Unfortunately, Divine passed away one year before The Little Mermaid hit theatres. John Musker, directer of Disney’s acclaimed animation Moana, said in a recent interview: “Even though it’s sort of disguised, it’s based on the character of Divine. She was a little mix of Divine and Joan Collins.” See? It’s legit. When we spoke to Ginger, she said: “Divine would’ve voiced Ursula if she hadn’t died when she did, so I feel like it would be right to have a drag artist do the role.” There’s a major lack of representation for drag queens on the big screen, so this could be the perfect opportunity to showcase drag to people who aren’t exposed to the art-form.

In the above performance, Ginger performs a rendition of Ursula’s classic bop Poor Unfortunate Souls. This doesn’t require much explanation. Just watch and you’ll be converted.