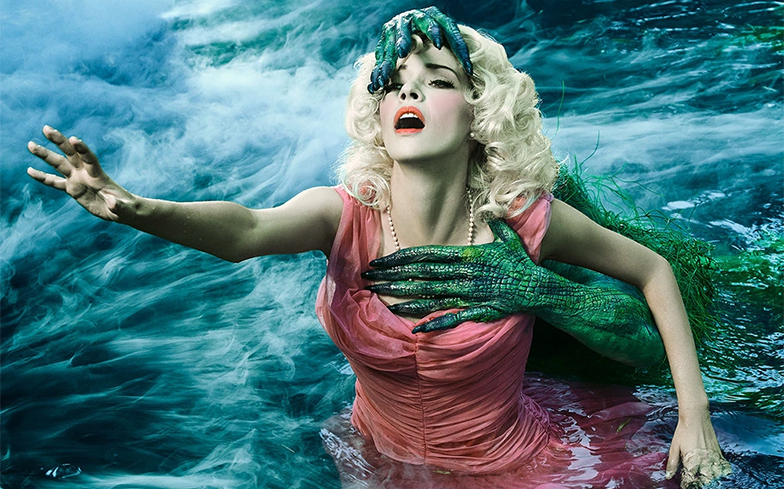 Each year, fans spend months trying to decipher what the theme of a new American Horror Story season could be. It’s usually made a little easier when teasers begin to surface, but that hasn’t happened yet.

Of course, that hasn’t stopped viewers from speculating on what could be coming next, though, and with previous seasons taking us from haunted houses to asylums, from witch covens to the end of the world, anything could happen next.

We’ve compiled a list of potential themes for the highly-anticipated ninth season. Let us know if you’re excited by any of our picks, or if there’s something else you’d like to see the series explore…

The most concrete theory at the moment was inspired by the penultimate episode of American Horror Story: 1984. After creator Ryan Murphy teased that the eighth episode of 1984 would include “a big” clue as to what fans can expect next year, viewers picked up on several references to aliens and space, including Mr Jingles saying he feels like he’s “floating in space”. Longtime fans will remember this is a concept that was briefly explored in the show’s second season, Asylum, when Kit (Evan Peters) was abducted and lifted into a spaceship. Are aliens about to make a comeback? Will we finally find out what happened to Kit?

Another potential theme fans have suggested based on the penultimate episode of American Horror Story: 1984 is the idea of urban legends. In the episode, when Brooke and Donna encounter a reporter for The National Enquirer, she says: “Back in the 70s, all anyone cared about was Bigfoot, aliens, the Loch Ness Monster, all that Leonard Nimoy In Search Of shit.” The line of dialogue stood out, and fans immediately latched onto it as a potential theme for season 10, especially after creator Ryan Murphy teased that there would be a hint in the episode. Another moment that stood out from that penultimate episode? Mr Jingles was dragged into the lake at Camp Redwood by a mysterious monster who was never explained or heard from again. Sure it was an homage to the final scene in horror classic Friday the 13th, but it could also be a hint at the urban legends theme, Creature From The Black Lagoon-style.

American Horror Story: The Walking Dead? The undead are a horror movie staple, so surely it’s about time. The series explored zombies in the third season, Coven, when the witches of Miss Robichaux’s Academy were targeted by voodoo queen Marie Laveau. The prosthetics were incredible and they were genuinely quite terrifying, so we’d love to see how Sarah Paulson and Kathy Bates would fare against a hoard of the undead. Adding further fuel to the fire, the recent cast announcement video from creator Ryan Murphy featured the song Dead Of Night by queer country star Orville Peck. Fans will know that Ryan loves his subtle hints and easter eggs, so it’s not too far-fetched to believe this is also a teaser of what’s to come.

We’ve been introduced to several ghosts throughout the series, most memorably in Murder House and Roanaoke, but imagine seeing how it would play out at sea? It’s an idea that’s been thrown around a few times, and fans have expressed desire for this to be explored. We understand why it’s not come to fruition, because it would require a hefty budget, but we have a feeling it could be one of the most terrifying instalments to date. Again, this is an idea that could have been hinted at in the recent cast announcement teaser, as the video was set against the backdrop of the ocean with the song Dead Of Night by Orville Peck playing. The possibilities are endless. A virus outbreak on board? A murder mystery? Maybe the Bermuda Triangle could even be involved…

This is a bit of a wild one, but hear us out. One of the most unique aspects of American Horror Story is that it’s an anthology series, meaning each season is an entirely new story with new characters, often played by returning actors (Sarah Paulson, for example, has played a whopping 11 characters on the show over the past decade). Could the upcoming season be an anthology in itself? The recent cast announcement video was accompanied by the song Dead Of Night by Orville Peck (yes, we’re going there again) which also happens to be the name of a British anthology horror film from 1945. It featured several stories across its 102 minute run time, including a haunted antique mirror and a possessed ventriloquist dummy, becoming an influential film in the horror genre. Maybe season 10 of American Horror Story will take inspiration from one of the individual Dead Of Night stories – or maybe it will take things one step further and have each episode be a standalone story. It would certainly mix things up for viewers, and allow Ryan to explore some of the many rumoured themes that have never been afforded a whole season to themselves.

Related: Here’s everything we know about American Horror Story season 10