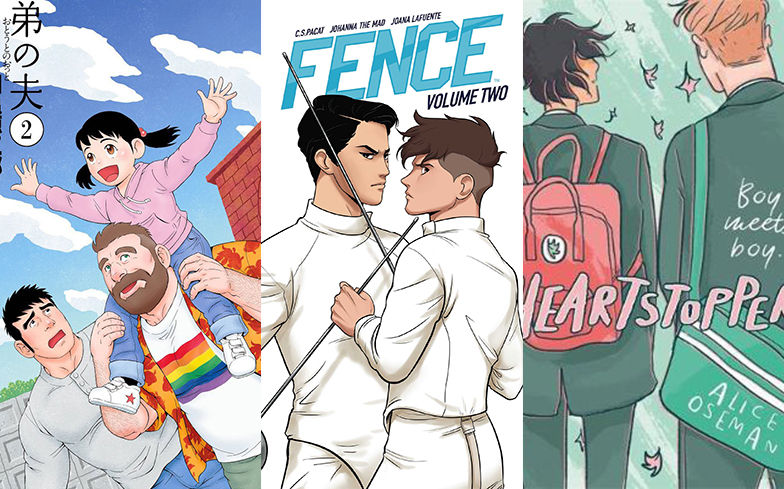 Time to add these inclusive books to your must-read list.

While Hollywood continues to drag its feet when it comes to meaningful and realistic LGBTQ representation, the world of comics, manga and graphic novels has long been a place for queer people to see reflections of themselves.

We’ve rounded up some of the best, from rivals-turned-lovers on the sports field in Fence, to exploring cultural differences between West and East in My Brother’s Husband. Beginning life as a tri-monthly comic series on blogging website Tumblr, Heartstopper is an adorable (and family-friendly) love story between a geek and a jock. Hey, we’ve all day-dreamed about it. Unlike many queer stories, Alice Oseman’s heartwarming comic is a light, easy read that features little in the way of trauma or major conflict. Sometimes, that’s just what we need. Read our interview with Alice here. In manga series My Brother’s Husband, work-at-home single dad Yaichi and his daughter Kana have their lives turned upside down with the arrival of friendly Canadian man Mike, who declares himself the widower of Yaichi’s estranged gay twin Ryoji. What follows is a story full of humour and warmth, but also an examination of the cultural differences between East and West, including Japan’s largely conservative view of homosexuality and the prejudice that still exists in the country. When aspiring fencing champion Nicholas Cox is humiliated by prodigy Seiji Katayama during a competition, he vows to one day defeat his new-found rival. But after being awarded a scholarship at elite boys school Kings Row, he finds out that Seiji has been appointed his roommate, and life becomes… difficult. Challenging the typically hetero-focused world of sports, Fence features same-sex romances and gender-fluid characters, making it a rare inclusive reading experience. Created following the horrific shooting at LGBTQ nightclub Pulse in Orlando, Florida back in June 2016, Love Is Love sees hundreds of the greatest talents in comics come together to pay tribute to those who lost their lives. The ‘oversized comic’ features characters from several franchises, including DC Comics and Harry Potter. Even better, proceeds from the comic go directly to help victims and their families who were affected by the shooting. Now that he’s finished high school, Ari can’t wait to trade slaving away over hot ovens at his family’s struggling bakery for life in the big city with his band. But when looking for his replacement, he meets Hector, who’s easy going nature and love for baking put a spanner in the works. Despite their differences, the two boys bond over batches of bread and rising dough, and before long it seems as though love is ready to bloom. If you’re looking for a same-sex romance with an adorable story and cute artwork to boot, this one’s for you.