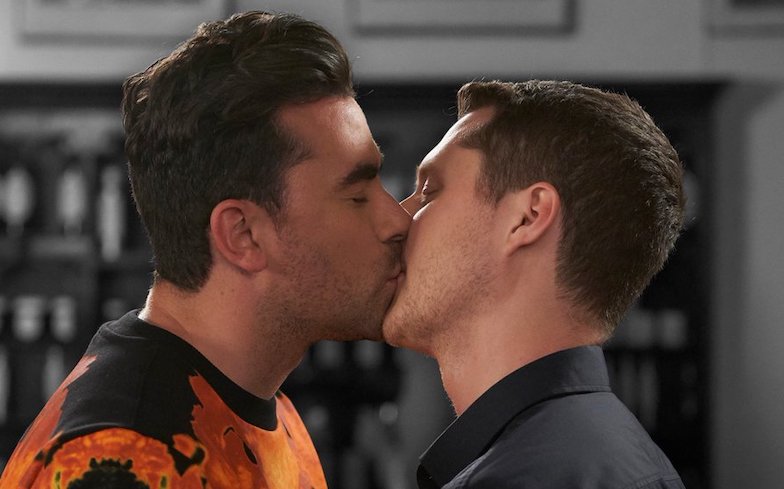 “This will be sorted for all future broadcasts of this episode.”

4Music have issued an issued an apology for censoring and cutting gay scenes on Schitt’s Creek.

Last month, a British fan tweeted Dan Levy – co-creator and star of the Canadian comedy series – after watching an episode that removed dialogue between his character David and his on-screen love interest Patrick (Noah Reid).

“4Music showed Schitt’s Creek with cut dialogue between David and Patrick. “…to sleep with me or whatever” is just missing,” they tweeted. “But their kiss is there. And episodes earlier talk of Moira sleeping with Roland remains.”

They pointed out that a scene in which Moira Rose (Catherine O’Hara) saying “fuck” had been left in, but scenes with David and Patrick, as well as David and his previous lover Jake (Steve Lund) had been “trimmed down”.

The tweets immediately gained traction, with fans calling on 4Music to give a response as to why they felt the need to cut harmless same-sex content. The backlash soon caught the attention of Dan, who tweeted them directly.

“Is this true, @4Music? Censoring kissing and intimate dialogue? Also, I will be retweeting this every day until I get a response,” he wrote. “Footage of the Jake/David kiss having been edited out.

“Aside from this censorship being highly disturbing and dangerous, it was a big laugh in the scene! This is very disheartening.”

“We do often edit shows for different time slots and David’s kiss with Jake was inadvertently lost from the episode that we played,” they wrote. “This will be sorted for all future broadcasts of this episode.”

A Channel 4 spokesperson also said: “Programmes are routinely edited for different broadcast slots, however in this instance a section containing a kiss between David and Jake was inadvertently removed from an episode of Schitt’s Creek broadcast this weekend on 4Music, this was due to human error, and will be remedied for all future broadcasts.”

Since its premiere in 2015, Schitt’s Creek has received universal acclaim from critics and has been lauded for its portrayal of its LGBTQ characters especially Dan’s character, who identifies as pansexual.