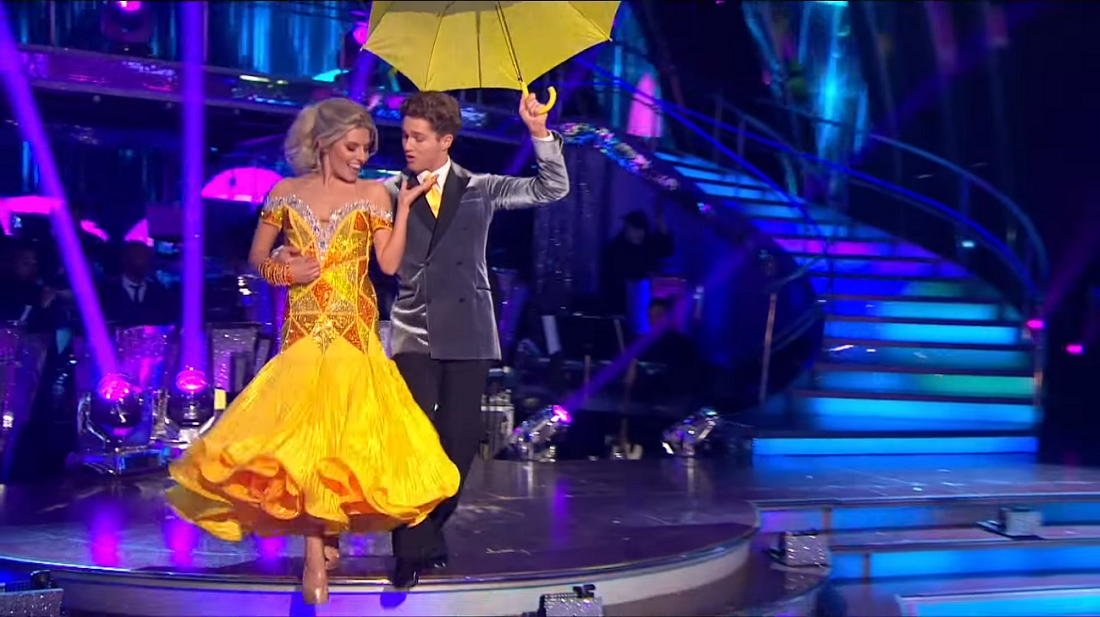 With Strictly, whenever the theme week ends the following week is generally a dud. And while this rang true with the early part of the show, the final half was nothing short of exceptional.

Last week, we bid farewell to Paralympic athlete Jonnie Peacock, after he ended up in the dance off against Debbie McGee. And although it is sad to see Jonnie go, he had reached the end of his ability, and Debbie is a beautiful dancer, who we will probably see in the final.

As we said, this week started off slow. There’s no denying that Joe McFadden is a good dancer, and his quickstep was technically very good, but it just failed to enthuse us. And then Alexandra Burke and Gemma Atkinson delivered their worst performances in weeks, although in fairness to Alexandra she did have the rumba, which is notoriously difficult for the celebs.

As for Gemma, the theme overtook the dancing, and so instead of getting a samba, we got some naff sleep-based thing.

But as the second half of the show came round, Mollie King delivered one of her best performances of the series, and this was quickly followed up by some mesmerising and beautiful routines from Debbie McGee and Davood Ghadami. Sadly, though this came to end with a crash as Susan Calman didn’t deliver on her American smooth. We were rooting for it to be good, but there was too much time spent on the benches, and not enough dancing.

And the celebs and pros got ever so cheeky up in the “Clauditorium” as they proceeded to chant for Mollie and AJ to kiss following their routine. But to make sure things weren’t so weird, they did then chant it at every couple who danced after them.

Of course, there’s no point in just heaping loads of praise on the dances, you need to see them for yourself…

You’ll hear Tess and Claudia mention this everytime an Argentine tango is about to come on, but this dance really is one of the fan favourites. And with Debbie McGee dancing it, it’s not hard to see why.

It Takes Two often calls Debbie “Flexy” or “Legs McGee”, and after watching this dance it’s impossible to not see why. Her legs were on full display, and it felt like they just never stopped moving. The best part was when hers and Giovanni’s legs locked together and swung back and forth. And her ballet history helped make the dance ever more amazing, as she did some breath-taking splits.

Some people criticise Debbie for having past dance experience, but not us. If you’ve got it, flaunt it, and Debbie did just that.

We’re not going to sit here and pretend this dance was perfect. Mollie clearly missed up at the end when she was supposed to go into a slide, but it instead ended as a little run. But despite that, this dance was one of her best, and was joyous to watch.

Mollie excels in ballroom, and this was no exception as she covered the floor brilliantly, and despite the high energy that this dance demands she managed to keep up with AJ. And all those rolling pivots that they did throughout the routine made us dizzy just looking at it. Ignoring that minor slip up at the end, Mollie’s footwork was amazing throughout as well, and following that routine she deserves to go through to next week.

Related: Meet AJ Pritchard: The Strictly professional getting all our pulses racing

We can’t say the cover version of Umbrella was our cup of tea though, but one thing that certainly was was Mollie’s dress. Honestly, if you don’t want it after the series ends, we’ll happily take it off your hands.

It’s quite hard to write about a waltz. When you cover things like a salsa or American smooth, you can look at the lifts. A foxtrot has swing and sway. Sambas have a party feel to them, and the charleston’s just nuts. But with a waltz, there’s not a lot to say. It’s either beautiful, or it’s naff. Thankfully Davood’s one fell on the beautiful side of things.

Davood and Nadiya moved gracefully throughout the routine, and the whole thing flowed from move to move. The fireworks halfway through the routine only exemplified how amazing the whole thing was. Davood is excelling in both the ballroom and the Latin dances now, it’s hard not to see him in the final.

But these weren’t the only routines that the celebs had to tackle this week. Clearly, the Strictly producers read these columns as they seemingly answered our prayers and gave us one more paso doble for the road as the couples competed in Strictly first ever paso doble-thon.

And it was filled with brilliant moments from Giovanni and Gorka staring each other down at the start, Kevin summoning Susan with a cape, and Joe’s epic knee walks down the centre of the floor. There were some issues though, like a lot of clogging in the corners, and really those costumes. This is Strictly Come Dancing, and yet those costumes looked plain as anything, couldn’t we have least gotten a little sparkle?

Strictly’s next live show is next Saturday at 19:05 on BBC One. And if you still need Strictly magic in your life Strictly: It Takes Two will be on every weekday at 6:30 pm on BBC Two, with the Friday show starting at 6:00 pm.