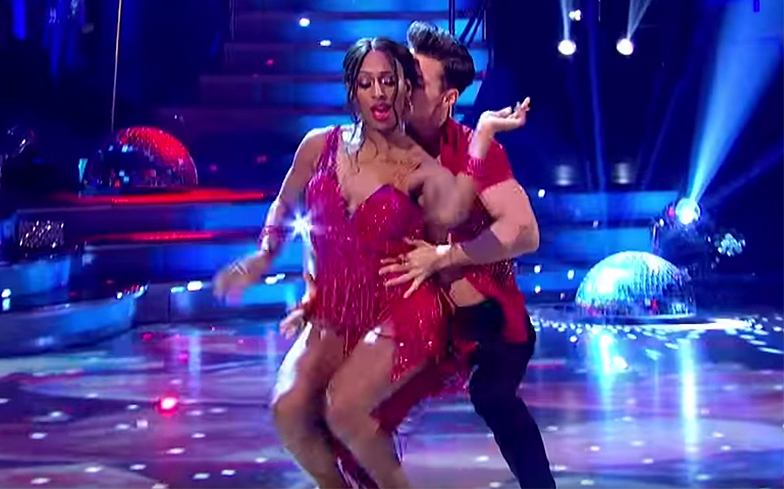 One week. That’s all we have left of this year’s Strictly Come Dancing now. To be in that final week, the celebs really had to deliver, and while some faltered, most did fabulous, jaw-dropping routines.

Last week, was the final week for Davood Ghadami, as his Argentine Tango failed to impress. It also probably didn’t help that he was up against Alexandra in the dance-off. Davood was an extremely skilled dancer, but he had no hope facing off against her.

This week, the dancers had to contend with learning two routines, one ballroom and one Latin. The first half of the show was the celebs on their weaker specialty, which really showed as Mollie King had a disastrous samba, and Debbie McGee had a pretty sloppy jive, with footwork which looked all the over place. That said, their routines were vastly improved by their pro partners – AJ and Giovanni respectively – having open tops.

And speaking of Mollie’s samba, we fear that Shirley may have morphed into Bruno during her judgement of the dance, considering her… let’s say enthusiasm. But it wasn’t only Shirley who got a bit over-enthusiastic during her judgement. Bruno was being Bruno, as per standard, but it was Darcey who shocked us all by vowing to wear Bruno’s speedos if Alexandra didn’t make the final…

That’s not to say that the first half of the show was a write-off though. Joe McFadden performed a very stylish American smooth, and Alexandra Burke delivered a very emotional Viennese waltz. And we loved Gemma Atkinson’s rumba, even if the judges didn’t think that it reached the high standard we thought it did.

The second half of the show was filled with powerful routines from the celebs. Mollie recovered admirably with her waltz, and Gemma delivered a killer of a tango. Joe, Alexandra, and Debbie all put in amazing performances as well, and Alexandra even managed a perfect 40 with her salsa.

Joe hasn’t always been our favourite performer of this series. He’s capable of brilliance, as evidenced by last week’s samba, but sometimes he just seems to be missing that crucial ingredient in giving a routine some magic. But he certainly wasn’t lacking that ingredient this week.

The solo part at the beginning may not have been to our liking, but as soon as Katya joined the dance quickly became stronger and more breath-taking by the second. The pair delivered perfect passion and intensity throughout the whole thing, and there was a little hint of ferocity as well in some of the leg movements. And how could we not mention that final move, we’ve never seen anything that spectacular in the history of Strictly.

That said, it wasn’t perfect. We mentioned how we didn’t like the solo bit, but poor Joe nearly lost his balance following his first lift. Thankfully, it didn’t impact the rest of what was an amazing routine.

Alexandra has had a rough few weeks recently, being in the dance off, and the target of a negative press campaign. But she never shows it in her dancing, and this week was no exception. Her Viennese waltz was serene, and this salsa was absolutely amazing.

As soon as Alexandra got on that floor tonight, she owned it. Her movements were effortless, she rotated brilliantly, and she achieved some brilliant lifts. And speaking of those lifts, she displayed no difficulty getting in or out of any of them.

And if you hadn’t noticed, Gorka had a lovely open top throughout that routine. Seems like whenever Alexandra’s doing a Latin dance he flashes the flesh – not that we’re complaining.

We’ve loved Debbie McGee since the beginning of the series. She dances beautifully, and this was on full show in this foxtrot.

Her moves throughout were both lovely, and wonderful, and the whole performance was just captivating. She had brilliants pivots, she looked elegant throughout, and we loved the side by side part, even if Craig thought that it went on a bit too long. But what does that old fuddyduddy know, eh?

But even though Debbie was beautiful, we still haven’t made our minds up on whether we preferred Giovanni in coattails, or the open top he had for the jive…

The final of Strictly Come Dancing will be broadcast next Saturday at 18:30 on BBC One. And if you still need Strictly magic in your life Strictly: It Takes Two will be on every weekday at 6:30 pm on BBC Two, with the Friday show starting at 6:00 pm.