28 Drag Race queens all on one stage together? Yep, it happened 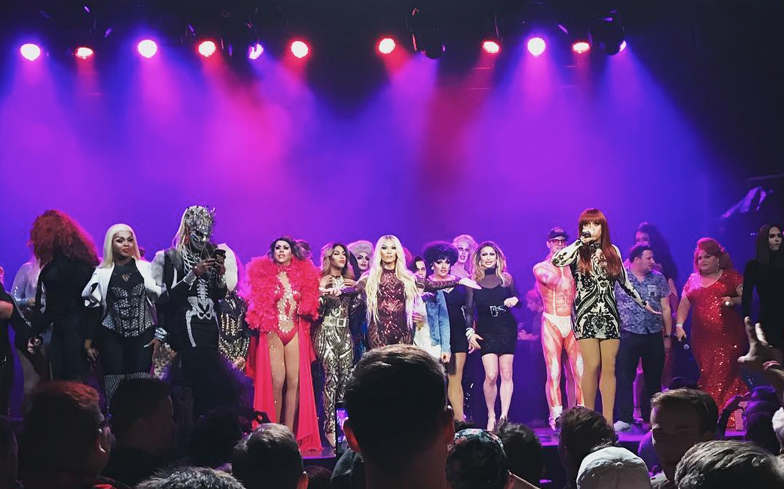 For the first time ever, a record 28 RuPaul’s Drag Race queens came together for a very special cause.

“I’m totally breaking brand for this,” Phi Phi told NewNowNext. “It’s powerful. It’s showing how much power one person can do, whether you have a TV persona people like or not. This is reality.”

Round one of photos from the queens United show! Everyone brought such amazing energy, I'm so glad I was able to be there and be a part of it! #queensunited #flipphonempls

Tickets sales for the event raised $50,000 alone, with organisers expecting to hit their target of $75k-100k once all the money has come in.

As well as tickets sales, the queens also donated their tips from the evening and proceeds from the merchandise sales.

“Queens United is a great name,” Phi Phi added. “I hope we bring it back. Because our president is not doing his job, we have to step up to the plate.”

Other highlights included Chad Michael’s lip-syncing to Cher’s Believe in her finest Cher outfit, as well as performances from Yara Sofia and Milk.

Tonight was simply incredible. What an amazing show. 28 queens from RuPaul’s Drag Race and 10+ of our incredible local queens from here in Minneapolis. All proceeds, tips included, going directly to aid hurricane relief in Puerto Rico. Never have I been more proud to be a part of the LGBT community. We queer folks get shit done! ???????? Thank you to @phiphiohara and @flipphoneevents for making this all happen! #queensunited #queensunitedreinasunidas #puertorico #twincitiesdrag #minneapolis

If you’d like to donate to Queens United/Reinas Unidas, you can do so here.

All Stars 3 is expected to premiere in early 2018, and will see the contestants compete in a variety of lip-syncs, challenges and of course, Snatch Game.