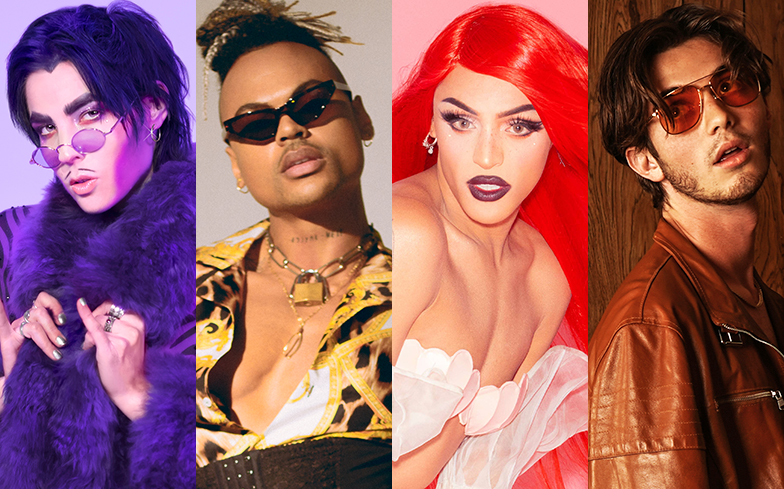 Queer artists are making some of the best new music out there right now.

Every year, more and more out and proud LGBTQ artists emerge, creating top quality bops and increasing representation for the community – and this year has seen the release of some of our favourite queer anthems of all time.

From queer females like Gia Woods and Kehlani, to gay men like Aaron Porter and Greyson Chance, to trans and non-binary stars like Kim Petras and Dorian Electra, we’ve rounded up 26 of the best LGBTQ anthems released so far in 2019.

When it comes to leading the way, no-one has soared higher than Lil Nas X so far in 2019. His debut single Old Town Road was addictive enough to start with, fusing elements of country, rock and hip-hop into an easy-going ear-worm of epic proportions. But with the added husk of Billy Ray Cyrus, the track went on to become the longest-leading hip hop song in the history of the Billboard Hot 100. And when Lil Nas X decided to come out publicly to mark the end of Pride Month, he immediately became one of the most successful openly gay rappers music has seen in quite some time – if not, ever.

We’ve been following the upward trajectory of L Devine’s music career for more than a year now, enjoying every sweet moment of the sugary pop she has thrown our way. But on Naked Alone she has offered up something slightly different. That finely-tuned pop sensibility is still very much at play with chewy hooks and an addictive chorus, but with it comes a healthy dose of infectious funk. Considering the cheekiness of the lyrics, it’s the perfect accompaniment to make this summer anthem slap in the way it deserves to.

MUNA’s 2017 debut album About U was one of our favourites of that year, so expectations are high for the follow-up. But if lead single Number One Fan is anything to go by, it’s going to deliver on all fronts. This strutting pop bop will have you reaching for the nearest pair of retro sunnies, slipping into an oversized denim jacket and striding down the street like you’re in your own 80s teen movie. As for that guitar at the end – magical.

Miley Cyrus has made a career out of reinventing herself, from her bubblegum Hannah Montana days, to her rebel Bangerz era, to back-to-her-country-roots album Younger Now. Her new era, including track Mother’s Daughter, feels like the most natural sound for Miley so far – rebellious, catchy and confident.

Halsey’s powerful new punk track, Nightmare, is by far the singer’s most adventurous single to date. The accompanying video for the song is also one of the most explosive clips of the year. It examines the expectations placed on women in our society and features an all-female cast, including Cara Delevingne, Suki Waterhouse and Debbie Harry. It’s with this song that Halsey (arguably) became an artist rather than your run-of-the-mill mainstream pop princess.

Earlier this year, teen sensation Greyson Chance returned to the music industry with his second studio album Portraits, a far cry from the teen-pop-rock sounds of his debut. This time, he opted for a synthpop, soft-rock tinged sound which is best reflected in Yours, a euphoric mid-tempo ballad. The album is incredible, but Yours is the standout in our eyes.

Left Me Yet – Daya

Daya has been consistently delivering bops through her career, from debut single Hideaway to the infectious Insomnia. Latest track Left Me Yet, a top-tier dance-pop anthem that deals with anxieties in a relationship, continues that trend.

After receiving universal acclaim back in 2017 with her debut album, SweetSexySavage, Kehlani has released a number of tracks including Honey, Touch and Again, but it’s Nights Like This with Ty Dolla $ign that remains her best post-debut release. The R&B anthem became her highest charting single in the UK, so the public seems to agree.

Carlie Hanson’s addictive pop-rock anthem WYA sees the American singer-songwriter writing a “love letter” to her future self, and is – in our opinion – her most universal bop so far. It’s the second single from her debut EP, Junk, which features several Avril-esque songs.

Deal With It – GIRLI

GIRLI’s long-awaited debut album finally arrived earlier this year, and while it contains pop-punk anthem after pop-punk anthem, Deal With It is the one that sticks out from the crowd. If you need a rowdy, ‘fuck you’ party bop, then this’ll be perfect for your summer playlist.

Following a trio of great singles last year, it’s now clear that Vincint was holding something very special back for 2019. Please Don’t Fall in Love is pop mastery, building into a crescendo of emotion, drama and impeccable vocals. Anyone can hear Vincint’s tone is distinct and full of texture, but when it’s put to use over layered production to this standard, the final result is powerful. Paired with the anxiety of a past flame moving on to find true love with someone else, this is an emosh banger that many will relate to.

Queer pop star Dorian Electra has forged their career out of subverting gender norms and expectations, and their latest single Daddy Like is no exception, arguing the case that anyone can be a ‘daddy’ regardless of how they identify or how much money they have.

Ever since King Princess (birth name Mikaela Straus) debuted in the industry, she’s been commended by mainstream media and fans for being unapologetically queer (have you listened to Pussy Is God?). With her new single, Cheap Queen, she tells us how “bad” she can be and says she can “make grown men cry”. Take that patriarchy!

After writing bangers for artists such as Britney Spears (Love Me Down), Charli XCX (Secret, I Got It) and Camila Cabello (Something’s Gotta Give), queer singer-songwriter Jesse dropped his incredible first EP this year, and it’s Alex’s Song that’s got us in our feelings.

Aaron Porter may have only released three singles so far, but he’s made his mark on the industry as an out-and-proud artist of colour – he’s doing it his way and he’s deconstructing gender norms one bop at a time. His newest single, the unapologetic R&B break-up song Sorry, details a failed relationship and the strength to move on from somebody who doesn’t deserve “forgiveness”.

Earlier this year, after gaining fame with roles in Fuller House and Reverie, actor and performer Ben J. Pierce launched a glittery, synth-pop assault on the charts with the fabulous hook-up single, Rendezvous. It’s the queer bop we need and deserve!

Emily Burns won us over last year with her infectious seven-track mini album Seven Scenes From The Same Summer, which put queer romance front-and-centre to the sound of chilled out pop beats. Now, she’s back with a brilliant new track called Too Cool, which might be our favourite thing she’s ever released.

Queer women are ruling pop music in 2019, and Gia Woods is up there with the best of them. New Girlfriend is a same-sex breakup anthem that cheekily sees her tell an ex-partner, “I like your new girlfriend more than you”. Incredible.

Pabllo Vittar is the most prominent and visible icon for Brazil’s LGBTQ community, who are faced with high rates of violence and a president who once said he’d rather his son die than be gay. So when she talks – or sings – we listen. Garupa, a new collaboration with fellow Brazilian singer-songwriter Luísa Sonza, is the perfect track to spice up your Pride party.

Following the huge success he achieved with his band Brockhampton last year – including a very impressive No.1 album in the US – singer/rapper Kevin Abstract decided to go it alone for a surprise project earlier this year. It meant the music could be more personal, touching upon his position as an openly gay man of colour at the centre of hip-hop. Baby Boy – a collaboration with fellow openly gay star Ryan Beatty – centres on feelings of isolation, reflecting on a time where he felt lost in the world. It’s a sentiment many queer people can connect with.

Tove Lo is one of pop music’s fiercest females, and she’s unapologetic about her bisexuality and sex positive attitude, as she should be. New single Glad He’s Gone is one we can all relate to – helping a friend get over a relationship that was no good for them. It’s also one of the biggest earworms of the year, and will be stuck in your head for weeks.

Considering the successful formula of his multi-million-selling first two albums, Sam Smith could have easily continued with his trademark blue-eyed soul and tales of heartache. But instead he decided to switch it up slightly – and the result is one of the best tracks of his career. Teaming up with former Fifth Harmony star Normani, Dancing with a Stranger leans towards R&B-pop with an addictive hook and effortless cool. It’s younger sounding than Sam’s previous output, but still very much puts his soulful vocal tone to good use.

When I Die – ALMA

When she was growing up, Finish pop star ALMA had an eclectic taste in music, ranging from punk to pop. Those influences collide in the best possible way on When I Die, hearing her IDGAF attitude play out over a meaty pop hook. The scuzzy production and roaring guitars give the track clout, while the chorus is packed with more fizzy energy than a can of Red Bull.

Aurora has been on our radar for a while now, but new album A Different Kind Of Human elevated her sound to a new level. Lead single Animal, which races along with tribal sounds and a heart-pounding sense of urgency, is a musical experience like no other.

With a new single released each week, it was hard to decide on just one track from trans pop princess Kim Petras to include on this list, but the incredible Icy just about edged its way to the top. It’s the kind of absolute pop banger that leaves you needing a lie down after listening.

In just a couple of years, Aja has left their Drag Race days behind and established themselves as a musical force to be reckoned with. Their entire Box Office album was amazing, but LGBTQ ally CupcaKke’s fierce guest verse made Safari Zone a standout.

You can listen to our Best LGBTQ Anthems of 2019 So Far playlist on Apple Music below: