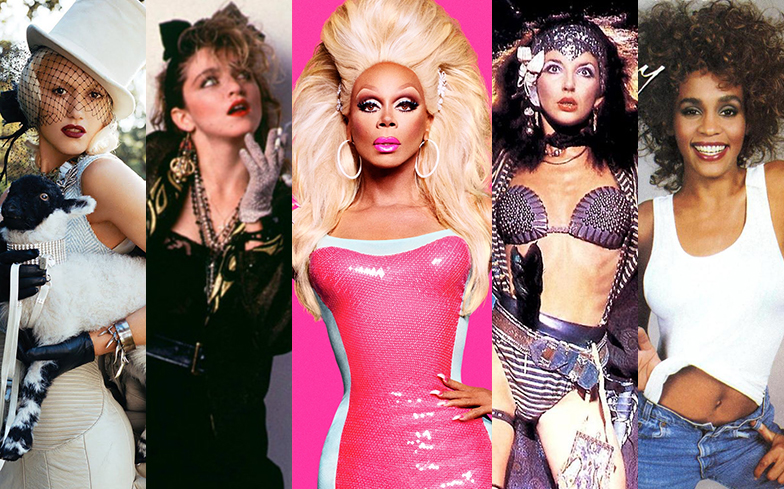 These pop bangers need to be heard on the main stage.

One of the most exciting moments in each episode of RuPaul’s Drag Race is the lip sync for your life (or lip synch for your legacy, if you’re watching All Stars) and finding out which queer anthem the queens are going to lip sync along to.

After ranking the fiercest lip sync assassins in Drag Race HERstory, we’ve decided to compile a list of 20 tracks that would make some great lip sync songs – to be honest, we’re surprised most of them haven’t been used already.

A very obscure choice to start our list, but it’s a perfect one. Ru always likes to throw a curve-ball into the mix, and this song is definitely a curve-ball. It’s all kinds of crazy, something that perfectly encapsulates Drag Race.

It’s very rare to see a Beyoncé song lip synced to on Drag Race. It’s probably because the rights to her songs are so expensive, but after Bootylicious was used for season 11, it seems likely we’ll see more Beyoncé tunes grace the Drag Race stage. Freakum Dress is a bop, and we can just imagine the queens going wild in their own Freakum dresses.

This one’s a song probably more likely to be seen on Drag Race UK, since it was a huge club hit over here. You’ll recognise this song if you ever watched Wild Child. This song is perfect for the queens, its high energy, fast paced and whole lot of sexy vibes.

This song has almost zero chance of appearing on Drag Race after the whole Call Me Mother debacle involving Azealia and Ru, but despite Azealia being a very controversial artist within the music industry, she has released some absolute bangers, and it’s such a shame we’ll never get to see the queens style it out to her music.

Another bop the queens can go absolutely wild with. The queens could really capture the meaning behind this song, being cheated on and channel their inner crazy ex.

This song is everything, honey, everything we need in a lip sync song. Sex, pacing, high energy you name it – oh and even a bit of rap thrown into the mix.

Why hasn’t Drag Race featured Grace Jones more in the show? She’d make the perfect guest judge. It’s only fitting the show pays homage to the icon with a lip sync to one of her hits, Pull Up To the Bumper.

Let’s be clear, we’re suckers for the campy style of drag, so another lip sync song that I think would bring this is Laura Branigan’s Gloria. Ru loves a good cheesy 80s bop, and Gloria is the epitome of this.

Sex, sex and more sex. It’s always a highlight to see the queens semi-kai kai on stage, a la Carmen vs. Raja. We’re kind of surprised this song hasn’t featured at all. So, Drag Race producers, if your reading this: this song is a must have for next season.

We know this choice is very out there, but we could really see Babooshka being a memorable lip sync song, similar to that of AS4’s Come Rain or Come Shine by Judy Garland. Kate Bush is one of our all-time favourite artists and we really could have put any of her hits on this list, but we feel Babooshka has the right pace and theatricality a lip sync song needs.

We had to sneak an ABBA tune onto this list someway, somehow. Going over their library it was so difficult to pick which song best suited being lip synced to, but this one for us has the right pacing and campy attitude needed.

Most likely to be seen on Drag Race UK, Florence is a quintessential British bohemian, and we could definitely see the queens serving hippy realness. This song exudes a lot of emotion and is perfect for a queen to truly embody.

Britney songs have heavily featured on the show, although we try to forget that ‘performance’ of Oops! I Did It Again. Slave 4 U would be just the right essence of sex appeal and Britney for the queens to use their bodies and utilise the whole stage.

It’s just criminal that Gwen’s solo music has not appeared on the show. Hollaback Girl, Rich Girl or even Sweet Escape could’ve made the list but What You Waiting for is just made to be lip synced to. It’s got the high octane vibe and chaotic energy that would be so watchable.

Tina Turner’s music has barely seen the light of day on Drag Race. We do believe her Bitch Is Back cover is the only Tina song we’ve seen on the show. So let’s go back to old school Tina with one of her original hits. Expect an abundance of hair whips and flailing arms.

One of the greatest tragedies in Drag Race HERstory is the lack of Beyoncé lip syncs. Lose My Breath is just everything we want, and we can just picture a queen like Trinity K. Bonet slaying the house down boots with this song.

Fergie is another artist we’re surprised hasn’t been heard on the main stage. The Duchess is a banging album and one of the key records of our childhood. Filled to the brim with hit after hit. Fergalicious would be such a fast-paced, bonkers tune to be lip synced to.

One of the more intense songs on this list, Sweet Dreams is a classic and one to be heard at the gay clubs. We’ve seen countless videos of queens give awesome renditions of this song, so we’re intrigued to see how it would translate onto TV.

It’s only fitting the queen of pop is featured on this list, landing at number two. Into The Groove is a fave at GAY TIMES, and to be honest we predict this song is going to be on Drag Race very soon (AS5 maybe?). It’s a song the queen could really channel their inner diva and make an iconic lip sync out of.

Landing at number one is Whitney Houston’s iconic I Wanna Dance With Somebody. There was no doubt that this song was going to be on our list – it’s such a feel-good song and something the queens could really have fun with and enjoy. We want smiles on our faces when we watch, similar to that of Trinity and Manila’s How Will I Know lip sync. What a perfect way to pay tribute to the late queen Whitney Houston.