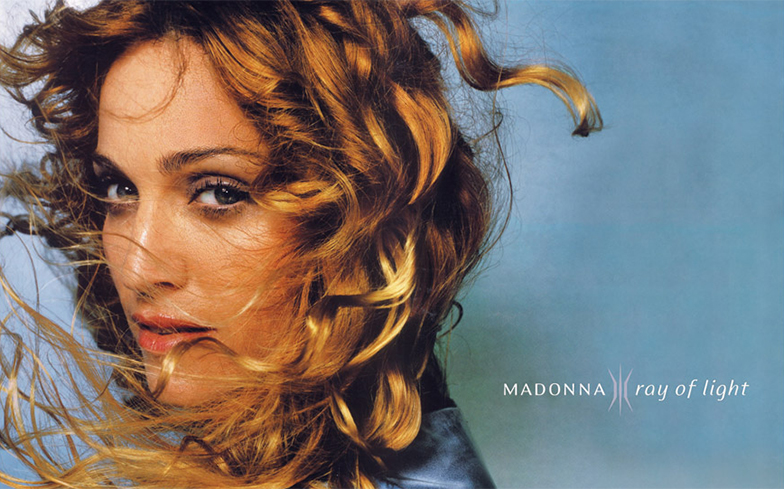 We’re sorry if that realisation has made you feel a little old.

Now Ray of Light is no longer a teenager and is officially a grown-up, we thought we’d put together a list of 20 interesting facts about one of the most iconic albums in Madonna’s extensive discography.

01. Madonna originally considered calling the album Mantra, but chose Ray of Light because she typically names her albums after a track on them.

02. It peaked at number 2 in the American charts when it was released. It was blocked by the Titanic soundtrack.

04. It also went to number 1 all over Europe, including in Spain, Germany and Italy.

05. At the time, it set the record for the most sales in a week by a female artist.

06. Madonna worked on the album with British producer William Orbit, who played all the guitars on on the tracks.

07. Orbit says remembers his fingers actually bleeding after playing so much. Nice.

08. The album won four Grammy awards, out of six nominations – including the 1998 Grammy for Best Pop Album. It also won the 1998 MTV Europe Music award for Best Album.

09. Adele is a huge fan of the album, citing it as a source of inspiration for 25. The track Frozen had a big impact on the singer, and she admitted that it gave her the “confidence to come and do me again.”

10. The mystical lyrics and music featured on some of the tracks were a result of Madonna’s dabbling with Kabbalah and her study of Hinduism and Buddhism after the birth of her daughter Lourdes.

11. Madonna received criticism from religious group The World Vaishnava Association, after her 1998 MTV VMA performance. They weren’t happy with her wearing a Bindi while performing a simulated sex act and wearing a see-through top.

12. The title song from the album is based on the 1971 folk track Sepheryn, which was written by Curtiss Muldoon and Dave Curtis. Madonna liked the song, and reworked it with Orbit for the album.

13. It was originally over ten minutes long. Madonna said it was “heartbreaking” having to cut it down to what she called “a sensible length” of 5 minutes 21 seconds.

14. Microsoft used the song in 2001 to advertise its Windows XP operating system. An interesting pairing.

15. The song was also part of a Family Guy gag which sees Peter Griffin take on the high-pitched chorus.

16. The album came out after Madonna played Eva Peron in the hit musical Evita. The star claims it was her vocal coach, who worked with her on the movie, that was responsible for increasing her singing ability.

17. Many critics have credited the album with introducing electronica music into mainstream pop culture.

18. Ray of Light is Madonna’s third-best selling album – with an estimated 20 million copies sold. This follows Like a Virgin and True Blue which both sold around 25 million each.

19. Rolling Stone magazine said that some of her vocals on the album sounded “painfully prissy” in their review of the album.

20. The cover art was shot by legendary fashion photographer Mario Testino – who apparently kept Madonna working past 2 am to get the right shot.