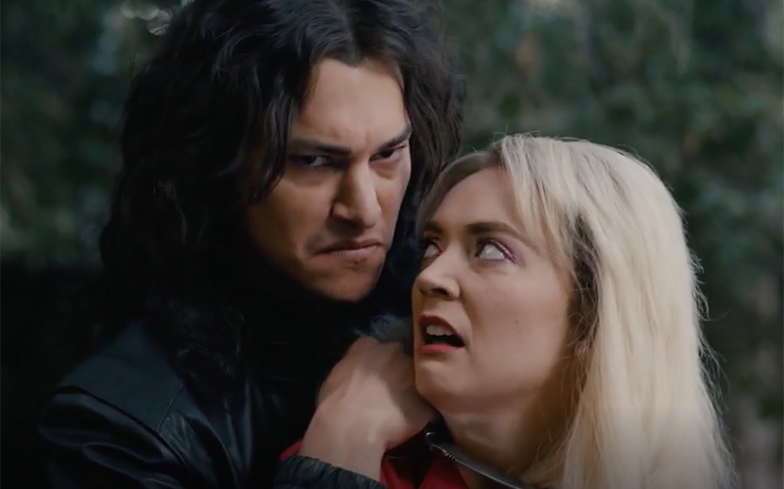 American Horror Story: 1984 aired its much-anticipated finale earlier this week and honestly, it was probably one of the most satisfying – and emotional – conclusions in the show’s nine-year history.

The episode starts in the present year and focuses on Jingles’ son, Bobby (played by Finn Wittrock), as he visits Camp Redwood to find out what happened to his father. He meets Montana and Trevor, who reveal that Jingles hasn’t been seen since 1989, ever since he was pulled into the river by a scaly, Loch Ness Monster-esque creature.

They explain that the ghosts of Camp Redwood have been torturing and killing Richard Ramirez – The Night Stalker – for over 30 years to prevent him from escaping the grounds and enacting his final revenge on Jingles by murdering Bobby.

After Richard escapes and attacks him, Bobby is directed by Montana to visit a nearby asylum for “answers”. There, he meets Donna, who further elaborates that Jingles was innocent of his crimes and he was set up by Margaret Booth. She tells him that in 1989, the ghosts brutally murdered Margaret, moments before Brooke was shot and killed in a struggle with her.

Bobby discloses to Donna that he has been receiving cheques for the past 30 years, which leads them to investigate and discover that Brooke – who has been alive the whole time and has been living a cushty family life in – was responsible.

Despite being warned by Donna and Brooke about returning to Camp Redwood, Bobby does so anyway and is repeatedly attacked by Margaret until he is saved by Jingles, Lavinia, Brooke and the rest of the counsellors.

The final shot shows Bobby safe, past Camp Redwood’s grounds as his father, his grandmother and his uncle watch on. Like we said, it was emotional. We’re going to go out on a limb and say it’s on the same tier as Asylum’s finale.

Although the finale was a fitting end to a fantastic season, it created a major plot hole for the series.

As you all know, Richard Ramirez made an appearance in Hotel (set in 2015) when James March held a party for iconic deceased serial killers such as Jeffrey Dahmer and Aileen Wuornos. In the scene, he mentioned how he died two years before.

Every season of American Horror Story is linked, so this makes no sense. Richard Ramirez was on Camp Redwood’s grounds from 1989 until 2019. He was under constant supervision, so how did he get to the Hotel Cortez?

Let’s say he did manage to escape and it simply wasn’t mentioned. Why would he stop by a random hotel for dinner when he made it clear that his number one goal was to kill Bobby? MAKE IT MAKE SENSE.

For now, we’ll just have to consider 1984 as American Horror Story’s only standalone season. But that doesn’t sit right with us. Maybe there’s two Night Stalker’s called Richard Ramirez? Maybe it’s set in an alternate reality? Maybe we’re too bothered about this and need to get a serious grip? We’ll go with the latter.

All nine episodes of American Horror Story: 1984 are available to stream on NOW TV.