185 German LGBTQ+ actors bravely come out in fight for visibility 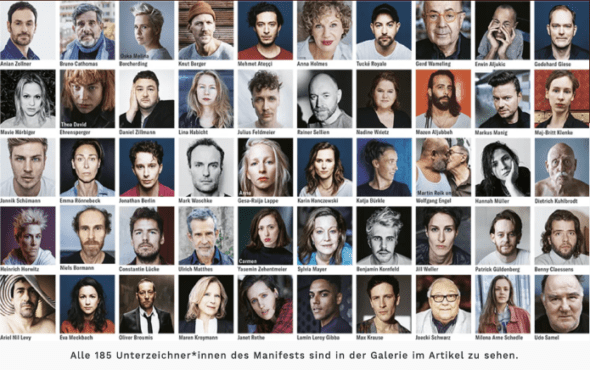 “We are already here!”

In a courageous step for equality, 185 LGBTQ+ actors have publicly come out in an effort for more recognition within television, film and theatre.

The brave actors took to the cover of Süddeutsche Zeitung Magazin, which is part of the German daily newspaper of the same name, with the headline “We are already here.”

“We identify, among other things, as lesbian, gay, bi, trans, queer, inter and nonbinary. Until now, we have not been able to talk openly about our private lives without fearing repercussions on our professional lives,” the manifesto reads.

The piece also features emotional interviews with some of the actors.

Karin Hanczewski from Germany’s number 1 TV drama Tatort spoke about the impact of this mass coming out.

“When we talked about it as a group, it suddenly became clear that this was how we could change something – as a group, as a big group,” she says.

Emma Bading, who starred in the TV film Play, opened up about her struggle as an actor apart of the LGBTQ+ community, stating: I wanted to attend an awards show and walk the red carpet with the woman I love, but was strongly advised against it, warned it would ruin my career.”

The manifesto also brought attention to the lack of racial diversity in German entertainment.

Lamin Leroy Gibba, a black German stage actor wrote: “Of course I want to play characters that were originally written white or hetero.

He continued: At the same time, I ask: Where are the black and queer characters standing in the centre of their own stories?”

Congratulations to the 185 actors who have come out to fight for LGBTQ+ recognition and equality!