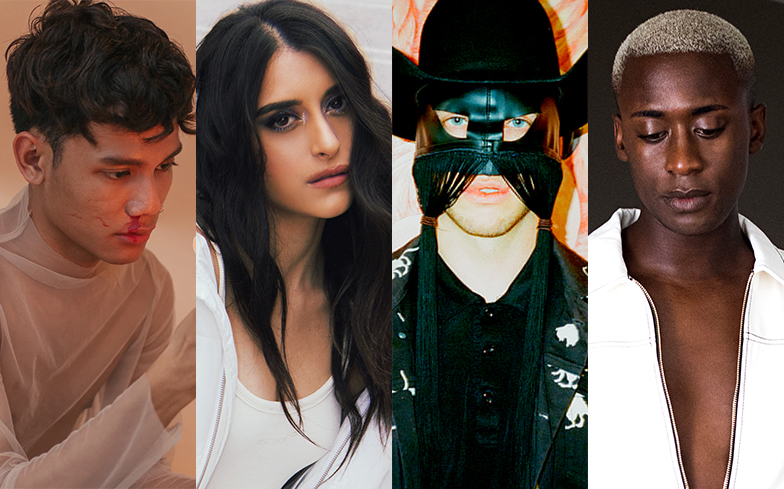 There’s never been a better time to be a fan of great queer pop.

While LGBTQ people have always had some presence on the charts, the accessibility of streaming services and advancements in equality over recent years has led to a tidal wave of new out and proud artists looking to dominate your playlists.

From the soul-meets-jazz-meets-funk rhythm of Arlo Parks, to the broody made-for-radio bops of Gia Woods, to alextbh’s brand of emotive pop, there’s plenty to discover and get lost in your own queer world to.

Better make some room on those playlists…

Despite coming from a country where LGBTQ people are discriminated against under law, Malaysian singer-songwriter alextbh is slowly blossoming into the queer Asian pop star the world needs. He’s been singing about boys for a while now, but his more recent singles including Walls and Still Mine have seen him properly refine his sound, serving emotive vocals over hypnotic, smooth-as-butter R&B production. His first 2019 release, No Space, ditches the sadboy pop sound in favour of funky guitars and a chorus that’ll work its way into your brain for days. We can’t wait to see what comes next.

It’s been a whirlwind 2019 for 18-year-old Arlo Parks to say the least. After rounding out 2018 with her song Cola, a few months later the release was given a boost by none other than Lily Allen, who made it one of her Top 5 tracks on Apple Music. Fast-forward to Glastonbury and Latitude Festival over the summer months and the rising star was playing her brand of soul-meets-jazz-meets-funk to some of her biggest crowds. Recent tracks Super Sad Generation and George have positioned Arlo as a talent worth keeping an ear on as she gears up to release even more new material later this year. British singer-songwriter Aaron Porter made his music industry debut last year with BOY, a queer slice of dance-pop perfection. The singer and dancer, who hails from East Grinstead, says he’s eager to “be a good role model for the younger generation” – and he’s doing this by entering the industry as an openly gay artist who isn’t afraid to touch base on sensitive topics such as toxic masculinity. Latest single Sorry proved his knack for an earworm chorus suitable for a superstar.

Orlando-born singer-songwriter Bronze Avery – birth name Gabriel Brown – released his fifth single at the end of last year, Want 2, a massive dance-pop anthem he describes as “bedroom sheets meets the dance floor”. This year has seen him follow it up with two just-as-promising bops. Split thrives with its striding beat and twinkling production, as Bronze’s smooth vocals lead the charge. Most recent release, Never Be You, mixes a throwback 90s beat and a shimmering pop sensibility with lyrics that bite back at an ex.

After hitting the spotlight with the 2017 feel-good summer bop Only One (which has been streamed over 50 million times), Carlie Hanson slowly made a name for herself in the industry with pop-perfect singles such as Mood, Us and Why Did You Lie? She debuted her first full body of work earlier this year, Junk, a five-track collection of angsty, pop-rock anthems that sound like an updated, albeit shorter version of Avril Lavigne’s debut album Let Go. Queer pop star Dorian Electra has forged their career out of subverting gender norms and expectations, and their debut album Flamboyant, which dropped earlier this year, took things to a whole new level of camp and experimentation. With assistance from songwriters like Bonnie McKee and Jesse Saint John, the record features plenty of standouts like sugar daddy anthem Daddy Like, grungy S&M banger Emasculate, and the glittery Guyliner, which we’re dubbing a spiritual successor to the excellent Charli XCX collaboration Femmebot. If you like your music loud and in-your-face, Dorian’s one for you. While the music industry has made great strides for representation over the past few years, there’s always room for improvement – and Davy Boi is hoping to be the first major pop star with albinism to break through the glass ceiling. The LA-based performer has just released his first EP-slash-collection, Errything So Far, which includes massive dance-pop anthems such as Dirty Mind (with Dai Burger) and What U Like, as well as his new self-reflective bop, Foundations.

British singer-songwriter Emily Burns released her first single Bitch last year to critical acclaim, and followed it up with same-sex love anthems such as Girlfriend At The Time and Cheat, all of which have achieved over one million streams each. Thet formed her debut EP, Seven Scenes From The Same Summer, which we couldn’t stop raving about this time last year. Her most recent EP, Pda, continues her talent for an infectious pop line with personal lyrics we can all relate to. If you’ve even been done wrong by former flame, Emily’s music is the perfect remedy. Continuing the trend of queer women making incredible pop music is Gia Woods. The 22-year-old released a few tracks here-and-there over the past few years, but 2019 is the year she fully committed to her musical career, having already released a string of made-for-radio bops that fit right at home alongside the biggest chart hits. New Girlfriend was a cheeky twist on a same-sex breakup anthem, bittersweet One Big Party sounded like the kind of song you’d belt out at karaoke (or with a hairbrush in your bedroom mirror), while Keep On Coming showed off Gia’s sultry side – if you think the title is brash, wait till you hear the lyrics. After writing songs for close friend Brooke Candy’s critically-acclaimed debut EP, Jesse Saint John made a name for himself in the songwriting industry when be penned several incredible pop tracks for artists such as Britney Spears (Love Me Down), Charli XCX (Cloud Aura, Secret, I Got It) and Camila Cabello (Something’s Gotta Give). Like several other talented songwriters in the world of pop Jesse has decided to launch a solo attack on the charts with his fantastic debut EP, Don’t Stop Dancing. Life Gets Sad. Glaswegian singer-songwriter Joesef has only released two tracks so far, but is already selling out multiple nights for his headline shows. A few listens of Limbo and Loverboy and it’s clear to hear why; smooth alt-pop driven by plenty of soul, expansive production and plucky guitars. And with social posts like, “Robyn has done more for the gays than any mainstream politician ever could,” we know he’s a musician after our own heart. L Devine is one of the UK’s most promising queer talents. Her debut EP, Growing Pains, was one of our favourite releases last year, thanks to pop jams such as Like You Like That, When The Time’s Right and Party On Our Own. Late in 2018, she unveiled her Heathers-inspired banger, Peer Pressure, which explores the idea of what it means to fit in, and how you navigate that while maintaining your individuality, and followed it up with her incredible debut EP of the same name. This year she’s broken through with her catchy anthem Naked Alone, with the funk-pop bop getting significant support across the board.

2019 belongs to Miss Benny. The 20-year-old actor, singer-songwriter, YouTuber and self-described “eyebrow activist” debuted in the entertainment industry nine years ago, but it feels like he’s – as cliché as it is to say, but we’re gonna do it anyway – officially arrived, and he’s taking no prisoners. Earlier this year, the star – real name Ben J. Pierce – launched a full assault on the charts with glittery dance-pop anthem Rendezvous, the video of which subverted gender norms and heteronormative culture. The critically-acclaimed bop was succeeded earlier this month by Every Boy, a mid-tempo synthpop number that sees Ben express his desire to kiss every guy in the world. A breath? Of fresh air? Absolutely.

Milly Pye is part of a new wave of queer artists making no apologies for who they are. While previous generations of pop stars have waited until later in their career to come out as part of the LGBTQ community, we’re seeing more and more young singers being open from the start, including Milly. Her infectious 2019 track Boys R Drugs – which feels more like a proper debut single than anything previously released – sees her warn the listener that “boys will make you sad” and “drive you mad” with their addictive qualities over crashing production. The music video queers the song’s message, as she taunts an unfaithful man before making out with her real-life girlfriend in a shower of glitter. It may not feel like there’s much queer representation in country music, but Orville Peck is here to change that misconception. The masked gay cowboy has gained a legion of fans with his stylish visuals and unapologetic approach to songwriting, with lyrics about the “men who would call me pretty” and falling in love with riders on his debut album Pony, a 12-track collection of Southern rock anthems that explores his life as a lonesome cowboy and his same-sex encounters along the way. Throughout his decade-long career, Ryan Ashley has mostly assisted artists such as MNEK, Becky Hill and H.E.R with their own music, but now he’s ready to carve his own lane in the industry as an out-and-proud queer person of colour. His debut EP, INNOCENT, is reminiscent of iconic R&B jams from the early 00s (think Usher, Mya etc), especially with tracks such as GUESS MY FRIENDS WERE RIGHT and FOREVER ANYWAY.

Are you a pop music stan? Do you love a sexually-liberated bisexual pop kween who doesn’t give a F? Meet Slayyyter, aka the *future* of pop music. Over the past year, the American singer-songwriter has left gays slain with the release of dance-pop anthems such as BFF, Platform Shoes, Hello Kitty, Daddy AF and her most popular bop, Mine, which has become her most successful single to date. She’s also made waves on social media with her quirky, ‘stan Twitter’-esque sense of humour, where she often finds herself riling up trolls with her “jackass jokes”.

VINCINT creates the kind of skyscraper pop that you’re convinced you can belt out during karaoke, but can rarely reach the dizzying levels of his vocal range. The US singer-songwriter has produced some absolute pop behemoths over the past year, with the ‘80s-tinged Mine and electrifying Please Don’t Fall In Love amongst some of the most exhilarating new music out there right now. And although the production is expansive it never swallows up VINCINT’s show-stopping vocals.

Keep up to date with all the latest new tracks by LGBTQ artists by adding our Queer & Now playlist to your Apple Music library: