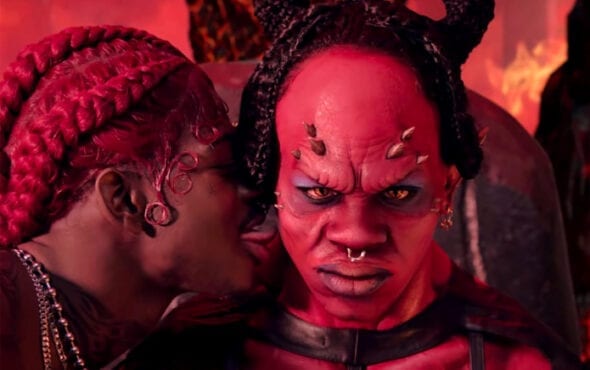 Over this past week, the rapper has continued to cement his status as the king of social media with clapbacks towards the conservative trolls who took issue with his new music video, Montero (Call Me By Your Name).

However – there’s always a ‘however’ isn’t there? – right-wing commentators, the ones who are still crying over Cardi B and Megan Thee Stallion’s WAP, slammed Lil Nas X for promoting Satanism and ‘corrupting’ younger listeners.

The criticism continued as the Grammy winner announced the release of his ‘Satan Shoes’, a collaboration with streetwear company MSCHF, which features a bronze pentagram, an inverted cross and a drop of human blood.

On social media, Lil Nas X was inundated with backlash from the aforementioned pro-Trump, conservative trolls. We repeat: trolls. An unbothered Lil Nas X then proved why he’s the ruler of hell and the internet.

Check out some of his best responses below.

this kid is disgusting. i’m never letting my kids listen to his new smash single Montero (call me by your name) that’s out right now! smh🤮

i literally sing about lean & adultery in old town road. u decided to let your child listen. blame yourself. https://t.co/gYmTi49BqB

u can’t last 30 seconds in bed with your wife https://t.co/6mFCJlceWb

don’t care and ur a flop

ur a whole governor and u on here tweeting about some damn shoes. do ur job! https://t.co/qaor6W0B9C

they shouldn’t be playing old town road anyway, we streaming call me by your name now 😌 https://t.co/jt6vr8KUbA

ok i’m gonna admit it. i’m sorry i fucked up. i should have never taken my titties off.

there was no system involved. i made the decision to create the music video. i am an adult. i am not gonna spend my entire career trying to cater to your children. that is your job. https://t.co/SzjjYe2tf4

showed my 3 month old niece the call me by your name video and she said “uncle that was quite the stupendous visual, why in heavens would any individual be enraged over such a sensational showpiece” i’m gonna go cry yall😢😢

there is a mass shooting every week that our government does nothing to stop. me sliding down a cgi pole isn’t what’s destroying society. https://t.co/H21SMVnfNQ

Following the release of Montero (Call Me By Your Name), which he co-directed with Tanu Muino, Lil Nas X posted a heartfelt message on Instagram to his 14-year-old self, explaining the importance of this moment for other queer people.

Montero (Call Me By Your Name) was produced by Take a DayTrip, Omer Fedi and Roy Enzo, and is available to download and stream now. It will be included on his debut album of the same name, which is due for release this summer.

You can watch the music video here or below.