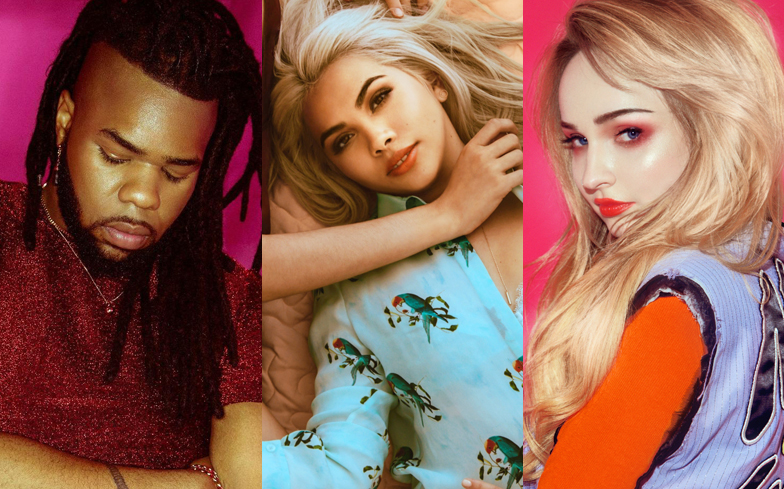 When people declared this year to be 20GayTeen instead of 2018, they really weren’t messing around.

Call Me By Your Name’s success at the Academy Awards, the massive response to coming out movie Love, Simon, and the Queer Eye reboot becoming one of Netflix’s unexpected phenomenons are just a few examples of how LGBTQ stories are pushing through to the mainstream.

But it’s been in the music world where LGBTQ narratives have been more prevalent than ever, as artists from all backgrounds and identities serve up unapologetic pop bops celebrating same-sex love, or challenging the current political climate.

We’ve rounded up 15 of the best LGBTQ anthems that have been released so far this year.

Years & Years: Sanctify
Giving us a first taster of album number two, Years & Years frontman Olly Alexander told fans that he’s “not shying away from certain topics anymore.” Sanctify is unapologetically queer in both its sentiment and its visuals. The song deals with Olly’s relationship with a straight man who he helped “explore his sexuality.” The singer added: “I feel like being gay is a blessing. I wanted that to come through in the song.” Amen to that.

Troye Sivan: My My My!
“A song of liberation, freedom and love,” Troye Sivan’s latest single My My My! has the kind of chorus that really takes off and never lets you land. With that sophomore album hopefully on the way, it suggests that the Aussie pop prince has got something very special up his sleeve.

Hayley Kiyoko: Curious
An earworm hook, effortlessly cool production, and a ferociously epic dance routine to boot: no wonder the kids hail Hayley Kiyoko as a “lesbian Jesus”. Curious is a stellar effort from the American singer, who packs her videos full of same-sex romance and desire. With her debut album Expectations just released, we are incredibly excited to see what 2018 has in store for her.

Kim Petras: Heart To Break
We’ve kept a close eye on Kim Petras’s blossoming career since she started releasing a new single a month last summer. The tracks have been getting better and better, but Kim kept the best as a Valentine’s Day treat for fans. Heart To Break is a shimmering 80s-inspired bop, with a strutting beat that’s infectiously moreish than a box of Cadbury’s Milk Tray.

MNEK: Tongue
We’ve been big fans of MNEK for years, but without any doubt, Tongue is his most fierce single to date. Brimming with confidence, intent and desire, it’s a pop bop you’ll find yourself declaring your love for in no time. As for that music video: there aren’t enough fire emojis in the world.

CupcakKe: Crayons
Now this is what you call an ally. Rising rapper CupcakKe is serving the T hot on Crayons – a bouncy anthem for her LGBTQ fans. “Girl on girl they like ‘Yup’ / But when it’s man on man they like ‘yuck’ / Motherfuckers need be go on with that shit / Bitch, we ain’t playing along, no skits.” Music to our ears.

Calum Scott: If Our Love Is Wrong
After soaring to fame on the Britain’s Got Talent back in 2015, Calum Scott’s dreams of becoming a popstar were coming true. However, he was facing a whole different nightmare in his personal life. Having struggled with coming out back in his teens, he was faced with the prospect of doing it all over again, except this time in the harsh glare of the media spotlight. If Our Love Is Wrong, which opens his debut album Only Human, hears him come to terms with his sexuality, and his fears of coming out on such a public scale.

Janelle Monae: Make Me Feel
Prince’s influence is clearly felt here, but Janelle Monae is a singer-songwriter who can take that inspiration and mould it into something that’s uniquely hers. Make Me Feel is buoyant and sexy, while also retaining throwback soul that will ensure it becomes a timeless anthem in her back catalogue.

Trixie Mattel: Break Your Heart
Drag Race All Stars 3 champion Trixie Mattel continues her mission to become the (Drag) Queen of Country with her second album One Stone, and her latest single Break Your Heart is the perfect concoction for the genre; plenty of guitar, a catchy chorus, and a break-up storyline with a twist.

Peppermint: BLEND
Drag Race queen Peppermint quite literally takes it to church in her latest single BLEND, which is a stroming pop bop with a political punch. Directly referencing the horrific violence and discrimination trans people experience on a daily basis, Peppermint defiantly sings: “I am so done trying / My heart will transcend / And I’m never gonna blend.” Preach sister.

Fischerspooner: TopBrazil
Taken from the band’s first new album in 10 years, TopBrazil is a pulsing club anthem bursting with sexuality. It’s no wonder then that the accompanying music video reflects that with an overtly free and queer set-up. In the words of frontman Casey Spooner: “The video celebrates a pop aesthetic typically reserved for the female archetype and liberates the male form to be sexual, expressive and fearless.”

Todrick Hall ft. RuPaul: Dem Beats
Now this is a house anthem you can get your life to. Todrick Hall serves up his most electrifying dance number yet, complete with on-point choreography and a cameo from Mama Ru herself. Dem Beats is the kind of song that will get the weekend started on a Friday and keeping you going through Saturday and Sunday too.

King Princess: Talia
Rising singer King Princess got off to a fantastic start earlier this year with her single 1950, but it’s follow-up track Talia that has us falling hard for her brand of wistful pop. “But four drinks I’m wasted / I can see you dancing, I can lay down next to you,” she sings to her ex girlfriend. Oh Talia, what did you do?!

Keiynan Lonsdale: Kiss The Boy
Fresh from stealing hearts in his role as Bram in coming out movie Love, Simon, Keiynan Lonsdale has used the opportunity to release this smooth R&B number celebrating same-sex love. “I’ve been afraid of my place, of this way, of my feelings,” he starts over minimal production which lets his silky vocal shine. By the song’s end he is embracing his heart’s desire: “Love is a game we deserve to play out loud.” Couldn’t have put it better ourselves.