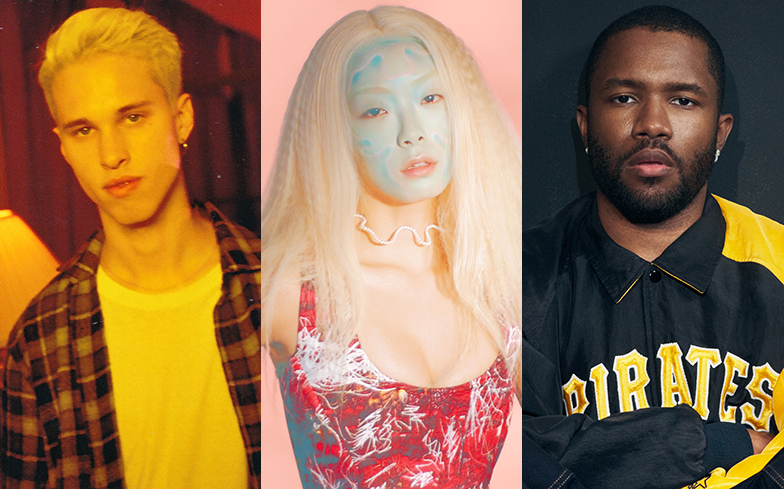 Music and romance have always been intertwined.

From candlelit dinners to the most memorable love stories on the big screen – these moments just wouldn’t be the same without a heartfelt soundtrack. Historically, this kind of music has been targeted towards straight couples, but in recent years we’ve seen an influx of openly LGBTQ artists who are unafraid to open their hearts and sing about queer love in all its forms.

Whether it’s Glaswegian singer-writer Joesef recalling his first same-sex romance on the slow-burning Kerosene, Rina Sawayama embracing her pansexuality on the soaring pop anthem Cherry, or Kim Petras encapsulating the spiralling feelings of uncertain love on If U Think About Me, love songs have never been so queer.

We’ve rounded up 12 of our favourites for you to add to your playlists this Valentine’s Day and beyond.

There’s little more powerful than first love, and Forrest Gump was the first instance Frank Ocean reflected on it openly and honestly through his music. Using the popular 90s movie of the same name as a metaphor, Forrest Gump recalls the feelings Frank has for the first man he fell for. “You run my mind, boy,” he sings. “Running on my mind, boy.” A production of church organs and twangy guitars gives it a Walden filter, wrapping you up in this story of lost love of yesteryear. Not only was Frank Ocean groundbreaking with his act of coming out, but Forrest Gump proved he was just as revolutionary in the way queer love can be presented to the mainstream.

Japan-born, London-raised singer-songwriter Rina Sawayama delivered another slice of nostalgic R&B perfection with her 2018 single Cherry, a song which is arguably the most personal she’s released so far as it also coincided with her ‘coming out’ moment. Lyrically, it deals with the feelings of having a pansexual identity while being in a heterosexual relationship, as Rina recalls being the subject of a stranger’s “girl gaze” on the subway and how it awakened something inside her. “It’s the truth for a lot of bisexual and pansexual people – they don’t feel authentically queer when they’re in heterosexual relationships, and that’s what the song is about,” she said at the time. With the help of longtime collaborator Clarence Clarity, Rina created a luscious 90s-inspired queer bop that still manages to sound like the future.

Troye Sivan – What A Heavenly Way To Die

After a debut album peppered with angst and heartbreak, pop heartthrob Troye Sivan turned to light on his long-awaited, critically-acclaimed sophomore release Bloom. There were plenty of contenders on this album for our playlist, from the tender minimalism of Animal to the explosively queer title track. But it’s What A Heavenly Way To Die, with its sugary-sweet lyrics of carefree love, that really tugs at the heartstrings. “Tell each other you’re the one, while we’re laying by the poolside, getting tired from the sun, fading in and out of long nights,” he sings. Troye revealed that the song was inspired by The Smiths’ There Is A Light That Never Goes Out, a track he and his boyfriend heard on a road trip which made him picture them in 30 years time, listening back and reminiscing.

Before she announced her queerness to the world, Janelle Monae teased that her sexual attraction went beyond gender with the incredible bisexual anthem Make Me Feel. Channeling the funk of her idol Prince, the song pulses with tongue pops, finger snaps and wobbly synths as Janelle refers to herself as “an emotional, sexual bender” – teasing the announcement of her pansexuality that she would make just two months after. The video itself is even more literal, as she runs between both male and female love interests in pink and blue hues, commonly referred to as ‘bisexual lighting’. Whether it’s a one-night affair or the beginning of love, Make Me Feel perfectly encapsulates the sexual tension and butterfly feelings a new partner can bring.

Like all of Glaswegian singer-songwriter Joesef’s songs, Kerosene perfectly captures those vulnerable, intimate moments, laying succinct storytelling over a jazz-infused composition. But this track in particular outlines a very particular experience: your first same-sex romance. “He was my first boy,” Joesef told us last year. “That was the first time I ever got with a guy, and it was the first time I ever met him as well.” On Kerosene, the excitement, nervousness, secrecy and joy of the situation pours through his lyrics for a sublime piece of queer storytelling.

When it comes to capturing an emotion and then popping a huge dance-pop production over it, very few come close to the brilliance of Years & Years. One of their finest examples, Desire, embodies that moment in a relationship where lust teeters on the edge of love. With a soaring refrain, Olly Alexander’s big vocal, and beats that will get your butterflies going, it’s hard not to be declaring your love by the end of this song.

Girl In Red – Watch You Sleep

Whether she’s singing about heartbreak, seasonal depression or the crushing weight of anxiety, Girl In Red has become one of the most honest and relatable voices of her generation. Watch You Sleep is an unusually tender moment from the rising indie-pop star, culminating in a soaring finale that’s equal parts romantic and melancholic as she attempts to capture an intimate moment in time and hold onto it forever. “Windows open, I can feel the breeze, but we’re safe here, under the sheets,” she sings. It’s an ethereal lullaby that revels in the naivety of young love.

US singer-songwriter Ryan Beatty knows his way around a same-sex love song. Here on Cupid, however, there’s a twist. He’s been struck by the arrow of love for his boy crush, but while their attraction is full of lust, the boy in question still hasn’t come to terms with his sexuality. It’s a love story queer people can relate to, and it plays out over a woozy soul-come-R&B production that gives the story a modern and youthful backdrop. It’s left with Ryan dreaming of the day that this secret love won’t have to play out in the shadows any more. Our hearts can’t take it.

When a song opens with “swimming pool of passion,” you know you’re in for a seductive bop. With Tongue, MNEK put all of his gloriously queer sexuality and desire centre stage for one of his most infectious singles. We’ve all been there; who takes the leap of faith first when it comes to saying ‘I love you’? In this instance, MNEK can’t help himself and before you know it he’s singing it from the rooftop. As far as modern love songs go, this is up there as one of the most exciting and innovative of the lot.

Kim Petras – If U Think About Me…

Pop princess Kim Petras has made a name for herself with a seemingly endless stream of A-grade pop bangers about designer clothes, no-strings-attached fun and every queer’s favourite holiday Halloween, but that doesn’t mean she can’t whip up an emotional love song out every now and then. If U Think About Me… was the final single to be released from her first era, and it showed a different side to Kim. “Circle right down when you’re not around me, and I lie each time when I say I don’t need you, ‘cause I think about if you think about me,” she confesses on the 80s-inspired mid-tempo, which deals with the uncertainty of love and the toll it can have on your mental state.

We’re used to hearing Canadian rapper Tommy Genesis sing about daddies, ‘playing with the p*ssy’ or being a bad bitch in general on her tracks, so it was a bit of a shock (though a pleasant one) when she dropped a love song on Valentine’s Day in 2019. It still retained the addictive hooks that fans have come to expect, but with lyrics that showed off a softer side of the star. “I walk with the strength of your spirit in my heart,” she confesses to a lover, while also delivering the tongue-in-cheek, sext-worthy line, “I only let you come inside”. Who said romance is dead?

When it comes to some queer country dealing with matters of the heart, you have to look to the modern-day master of the genre, Orville Peck. Dead Of Night is all yearning guitar pangs, affecting beats and Orville’s deep and dreamy tone packed with more emotion than an episode of TOWIE. But here the lyrics are bittersweet. Orville’s in love, for sure, but it’s unrequited. “You know is never gonna go anywhere,” Orville said, “but you stay with that person and torture yourself because it’s better than nothing.” We can relate.

Listen to our Queer Love Songs playlist, featuring the above songs and more, on Apple Music now.