10 of the greatest queer female characters in TV herstory 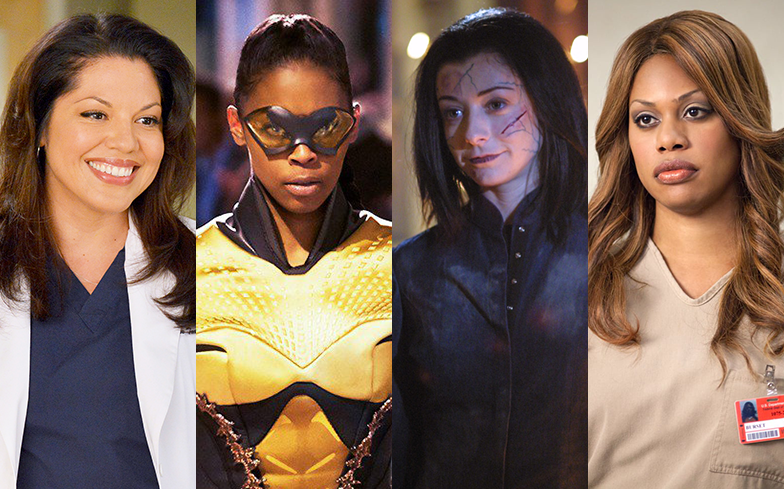 In honour of International Women’s Day, we rounded up our 10 favourite queer female characters in television.

From the first ever black lesbian superhero on TV to the longest running queer female character in history, representation on the small screen continues to become more inclusive for women from all parts of the LGBTQ community.

Check out ten of the best queer female characters below. Nafessa Williams’ portrayal as Anissa Pierce has been lauded for making television history as the first black lesbian superhero. In an interview with Entertainment Weekly, Nafessa said: “I believe love is love. I’m just really grateful to tell the story for young lesbians – and black lesbians in particular – who don’t really see themselves on TV. My hope is that when you watch Anissa, a young lesbian is inspired to walk boldly as who she is and to love herself and to love herself exactly how she looks. I hope that our family on the show is an inspiration for some families just to be open and accept your children and love them. The Pierce family does a great job of doing that.” When it comes to Blanca Evangelista it’s 10s across the board from us. She may have only strutted onto our television screens very recently in Ryan Murphy’s groundbreaking series Pose, but she is well on her way to iconique status in our eyes. Mother of the House of Evangelista, she keeps her queer brood in check with a firm, fair and fabulous heart, making sure they all have the love and support to achieve the opportunities she never had herself. Blanca is a true queen in all senses of the meaning. Can we get an amen up in here?

Bisexual character Callie Torres has received universal acclaim ever since her introduction to Grey’s Anatomy in the show’s third season. After appearing in in 11 seasons and 239 episodes, Callie became the longest running LGBTQ character in TV history. Her relationship with Arizona Robbins was also lauded by critics, and the two became firm fan-favourites within the LGBTQ community, being frequently named as two of the most iconic lesbian characters on television. In a performance of a lifetime, Sarah Paulson portrayed Lana Winters, a strong-willed journalist who is wrongly committed to Briarcliff Manor asylum for trying to expose the mistreatment and torture that occurs there. She’s one of the strongest characters to come out of the show; not only is she working in a male-dominated field in the mid-60s, she’s also a lesbian, and has to hide her relationship for fear of repercussion. It’s no surprise that she’s a favourite among LGBTQ viewers.

Laverne Cox’s groundbreaking portrayal of prison inmate Sophia Burset led to the American actress being nominated for an Emmy, making her the first transgender person to be nominated for such an award. Throughout her run on the series, Sophia struggles with being denied her hormones and is convinced it’s on the basis of discrimination. She’s also put in the SHU for “protection” against other inmates, and has her wig confiscated. For those who have little knowledge of the transgender experience and the discrimination they face, it’s an eye-opener.

Willow Rosenberg and Tara Macclay were one of the first lesbian couples on television, and their relationship was undeniably the most positive romance throughout the whole seven season run of Buffy. Tara’s death in the show’s sixth cycle led to widespread backlash among fans, who accused creator Joss Whedon of being homophobic (so stupid). Her murder at the hands of Warren Mears (Adam Busch) resulted in Willow’s iconic Dark Phoenix story arc, which led to her flaying Tara’s murderer alive and attempting to destroy the world. In the seventh season, Willow rebounds with the irritating potential slayer Kennedy (Iyari Limon), and their love scene became the first lesbian sex scene on network television. Shame it wasn’t with Tara, but still. San Junipero may have only been one episode, but the impact of Yorkie and Kelly’s relationship cannot be denied. The episode was critically-acclaimed for the chemistry between its two leads, and for the surprisingly uplifting tone in a series usually plagued by tragedy. It won two Emmy Awards in the Television Movie and Writing for a Limited Series, Movie, or Dramatic Special categories, and is often regarded as one of the finest episodes in television history.