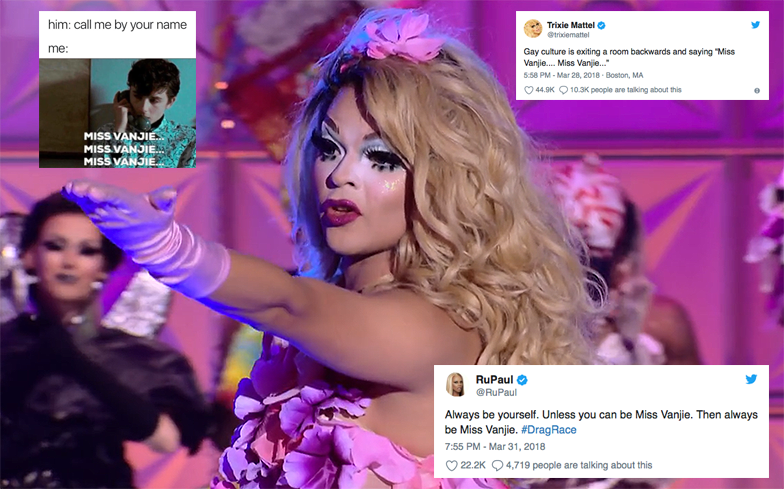 When Kalorie Karbdashian-Williams emerged victorious from her lip-sync against Vanessa Vanjie Mateo in the Drag Race season 10 premiere, viewers were truly shook, gooped, gagged, even cooped.

Besides Shangela in season two – who then went on to compete in season three and All Stars 3 – no other first-out queen has had as much impact as Miss Vanjie, with her elimination spawning several hilarious, gag-worthy memes. Oh honey, even Mama Ru has joined in!

We’ve collected ten of the best memes (so far) that show why Vanessa “Miss Vanjie” Mateo is the true Drag Race season 10 winner. Sorry remaining queens, but none of ya’ll will measure up to the iconic, revolutionary and groundbreaking Vanjie.

Get your jush below, and let us know which is your personal favourite in the comments!

What happens when you say “Miss Vanjie” three times in front of the mirror in a dark room. pic.twitter.com/cLqm0jPCOD

I have loved you
for the last time

Is it
Miss Vanjie pic.twitter.com/LMt9iMyllX

Straight people on Twitter the past two weeks: pic.twitter.com/tYgwHNfOwS

The name on everyone’s lips is gonna be…. MISS VANJIE@VanessaVanjie @RuPaul pic.twitter.com/DDRy7DhIGF

This set of photos really made me chuckle. Miss Vanjie #DragRace pic.twitter.com/MDBVRyn94S

We haven’t included any of Ru’s in our top ten, because honey, her Miss Vanjie memes deserve their own space.

Has RuPaul ever tweeted or adored a queen this much on social media?

BRB while we replay Ru and Michelle cracking the f**k up at Miss Vanjie’s exit.