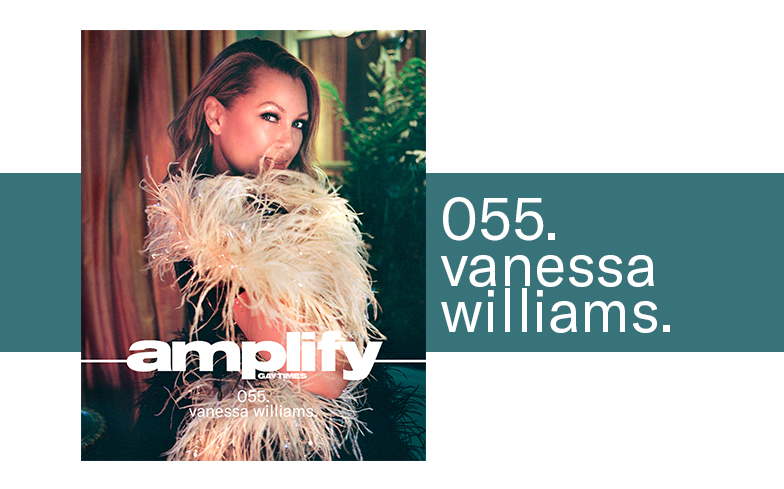 The Tony, Emmy and Grammy-nominated star is making her West End debut.

“I’m sure she’d probably vote for Trump just because she was probably at the wedding and he owes her a favour,” Vanessa Williams says of her iconic Ugly Betty character, Wilhelmina Slater, to a room full of disappointed Mode-obsessed gays. “She probably hooked Melania up with her inaugural outfit too!”

We’ve just spent the past two hours on set watching the Tony, Emmy and Grammy-nominated icon prove why she made history as the first African-American woman to win the title of Miss America. ‘Yaas!’ and the gayest of finger clicks can be heard as Vanessa serves opulent 1940s glamazon – an opulent 1940s glamazon who is about to make her West End debut in a revival of Olivier Award-winning play City of Angels.

From 6 March at the Garrick Theatre, Vanessa will step into the infamous role of Carla/Alaura in Josie Rourke’s critically-acclaimed, film noir-inspired production, which focuses on a crime novelist working on a screenplay adaptation of one of his books as his marriage crumbles. “It’s a challenge!” admits Vanessa. “To do eight shows a week, I’ve got to be inspired by the music, the book, the team of creatives and the ensemble. It’s a discipline, and luckily, I’ve been able to do it all my life.”

To commemorate her West End debut, we caught up with the legendary actress and singer in Soho’s L’Escargot to discuss her return to the stage, how Ugly Betty was ahead of its time with LGBTQ representation and what she wants to (and will) conquer next in the entertainment industry.

You’re about to make your West End debut – why was now the right time?
The offer! I’ve always wanted to live abroad in London and study here. But instead of studying, I get a chance to take all my years of experience and display them on stage. I’m really happy to be able to soak it all in, work with amazing, gifted and talented British actors and actresses, do a fantastic show that hasn’t been done in over 30 years. It’s a challenge! I’ve done revivals, but it’s not just a revival, it’s replacing and stepping in for a legend. For this particular piece, since it’s never been done again on Broadway, when the offer came in from Josie [Rourke]… I heard that when she did it at the Donmar, it won all these awards and was a new take on what the show was. I knew she’d done it successfully, that she had a lot of great creative ideas, and I’d seen Mary, Queen of Scots and was a fan of her as a film director, so it was very intriguing to me to work with a female director who’s reinventing theatre and making bold choices. When the offer came in, I FaceTimed her and she said, ‘I’m so passionate about this, you are my only choice. Please, please, please!’

How could you refuse?
How could I refuse? To do eight shows a week, I’ve got to be inspired by the music, the book, the team of creatives and the ensemble. I remember when Toni Braxton, who’d never done Broadway, called me and said, ‘They want me to do Beauty and the Beast, what should I do?’ I said, ‘It’s eight shows a week. If you love the music and you can commit to it, then do it, it’s a great experience. But, you’ve got to love it.’ It’s a discipline, and luckily, I’ve been able to do it all my life. When I jump in and out of different genres, whether it’s film, television or stage, I’ve got the skills to land myself to whatever I need to.

This cast is amazing and the gays are going to love this because you, a gay icon, will be starring alongside Girls Aloud’s Nicola Roberts, another gay icon…
She is lovely, and she knew my daughter Gillian. The first day we met in rehearsals, she said she was really good friends with Gillian, because they had the same label five or six years ago. Oh and Theo James? I don’t mind kissing him, sorry girls! He’s a great actor. Once you get over his hunkiness, he’s great and very committed. Theo and I have one number together and it’s very sexy. We end up on the bed a couple of times too…

Oh wow. Are your kids going to be watching?
Of course! My daughter will be crying with happiness! Or jealousy…

You play two very different roles in this, and one is quite villainous – can you tell me about the character?
Yes! I would consider her to be the killer nurse. She’s married to a very wealthy man and you find out from her past that this isn’t the first time she’s been married to a very wealthy man, and they seem to not last long under her care! She’s definitely alluring, hence her name Alaura, and wields her power with ease. Oh and the costumes are fabulous, I’ve got to say that. The wigs are going to be great.

You playing a villain is just perfection, which brings me onto Ugly Betty…
You know, Silvio [Horta] just committed suicide. It was shocking, and my first emotion was that I had no idea that he was so sad, that he felt so badly. It’s horrible.

What legacy do you think Silvio has left behind?
When me and the cast were talking about our experiences with Silvio and we looked back to 2006… Just look at what he put on television. We’re talking 2006. Mark Indelicato’s character having parents who supported him being gay, Alexis Meade being trans, a powerful black woman running a business… She was intellectual, she had money, she was articulate and she had the power. Silvio listened, took chances and always pushed the envelope, and you wouldn’t have Glee and Jane the Virgin and all these shows. We had Ignacio not being able to get his green card, having trouble with immigration, this was all happening years ago. The show delved into so many things and I was so happy. We could easily have ran many more years but it was an expensive show and the recession hit, so they got rid of us. Whenever I see any scene from it, I forward it onto all my peeps and say, ‘Don’t you miss it?’ I see Michael [Urie] all the time as we live in the same building and I went to America [Ferrera]’s baby shower. It was one of those casts. I’d read a script and say, ‘Oh, I’m playing softball with Naomi Campbell this week.’ You never knew what you were doing next! The writers trusted us and anything they wanted us to do, we’d do it. It takes a specific actor to have a big skillset, be comfortable with their body, do things humorously, but also be able to turn it on and make you cry. That’s what made our ensemble so good, as we felt like an acting troupe. ‘What’s next? Throw it at us!’ We were there so late all the time and worked our asses off, but we loved it.

For years there’s been talks of a revival…
I don’t know whether it’d be organic. America is now mid-30s – where would Betty be now? Initially, when Betty went to Mode and ended up here in London, I was saying to Michael that we should do Mode UK and come here, but we couldn’t get that going…

Where do you see Wilhelmina Slater now?
She’s still not married because she’s way too much to handle. Even if she did marry it’d be temporary, she gets too annoyed with ineptitude way too quickly and she’d always find something that disappoints her in a man. She’d be alone, living in her fabulous penthouse and maybe travelling the world.

Is Marc still beside her?
Of course! Marc is always beside her, doing her botox.

And who would she vote for in the upcoming election?
Well… The joke was that, back in the day, she was Dick Cheney’s friend and a strict Republican, and that’s what made her that more evil. I’m sure she’d probably vote for Trump just because she was probably at the wedding and he owes her a favour, and she has some political but also personal connection with Melania. She probably hooked Melania up with her inaugural outfit too. I look back on it all fondly, I cherish those days and there’s been nothing quite like that. We had Betty White and she was so willing to be made fun of. Obviously, she had a stunt double when she was dragged down the street, but she was willing to go there. She was hilarious and people loved to be on the show because it was funny.

Do you know what I recently found funny? The video you uploaded of you and RuPaul from DragCon UK…
[Laughs] I happened to be coming from rehearsal and I ran into Michelle [Visage] on Tottenham Court Road. She said, ‘I’m doing DragCon this weekend, you’ve got to come!’ And I was like, ‘Fine.’ I get to see Ru all the time, I’ve known Ru since the 80s or 90s and I’m so glad Drag Race is here. I went on Sunday and just looking out there were young kids, teenagers, people with disabilities and elderly people… There was such a range of people, and what a progression from even the past 10 years. My other daughter Sasha, she’s 19 and she grew up watching Drag Race in the United States. When she was in second grade she was like, ‘I know that queen and this queen,’ and there was no judgement, which I love. All my kids have gay friends and it’s so comforting to know that we’ve come so far. I lived through the AIDS crisis. Five people from my first wedding died of AIDS. I’ve seen the terror. I’ve gone to hospitals while pregnant to visit a friend who was dying of the virus and people said to me, ‘Are you crazy?’ I said to them, ‘He’s my friend, and no. I’m not crazy.’ Now you have so many examples where people can say, ‘I see myself.’ We didn’t even have black dolls growing up. The world is a wonderland for everybody now.

You’ve done television, films, music, books, Broadway and West End – what else is left to conquer?
Producing! I have a list of things I would like to produce, some to act in but there are a couple of true stories I’d like to do. It’s all about creation, I get turned on by meeting people and being inspired. And at 56-years-old, I’m so lucky to still be in the game, although my inner dialogue when I’m about to kiss Theo James is, ‘I used to be hot, I swear I used to be hot!’ He’s 35, I’m 56. It’s like, ‘Jesus, is this a cougar moment?’ I have to get that running dialogue out of my head, but I’m happy to be doing something that makes me excited. My favourite feeling is the first day of rehearsal, you get your music, you have your music stand, the piano’s there and you’re listening to the music for the first time with everyone in the same room. With legendary people like Steven Sondheim over here and Josie Rourke over there, it’s like, ‘Here we go!’ It’s another adventure and you don’t know how it’s going to go. The thrill is what I’m always after.