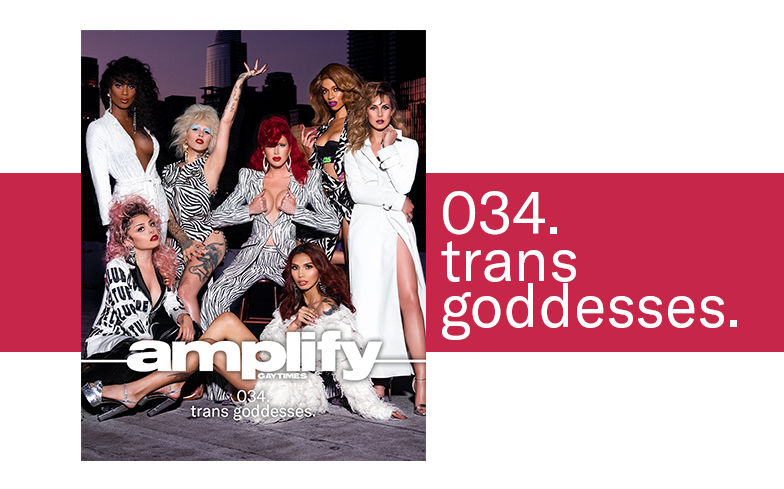 “Media portrays us as hookers, but we have a lot more to say, and this type of female empowerment will be something to inspire others,” says Love Bailey.

That’s why the cultural visionary, performer and designer decided to bring together a group of heavenly trans women. All seven of the women featured in this editorial challenge the status quo, living their lives authentically and inspiring generations of trans and cisgender people to embrace their truth.

So who makes up our group of Trans Goddesses? Love Bailey has worked with everyone from Britney Spears to Naomi Campbell, becoming a creative force in the fashion and entertainment industry. Zackary Drucker is an actress and television producer, having worked on the TV series Transparent. Mz Neon is a musician on the LA scene brimming with punk energy and performing live regularly.

Gracie Cartier, meanwhile, is an Emmy-nominated celebrity hairstylist who works with Hollywood talent including Jada Pinkett Smith and Pose’s Angelica Ross. Arisce Wanzer is a supermodel and comedian with an ever-growing social media following. Daphne is a model and dancer who recently hosted the first inclusive lineup of strippers at the iconic Cheetahs Strip Club. And lastly we have Luna Lovebad; a music artist on the rise who recently released their new EP, Lit Up.

Here, these seven inspirational women are interviewed by Rosa Costanza about the challenges they’ve faced, the lessons they’ve learned, and their experiences as trans women in 2019.

How did you establish yourself in your industry? What was your turning point or tipping point?

Zackary Drucker: Established is an interesting word. You know, I think that getting a foothold in any industry requires tenacity, hard work, and believing in one’s self.

Mz Neon: Performance arts was a way I could validate my existence growing up after being bullied and teased, and I just felt like being on stage was the only place where I could feel normal, safe, and contextualised, I suppose. Performing allowed me to be feminine, wear makeup, and do the things I wasn’t allowed to do at school or at home, and it was a way for people to see me and my authenticity.

Overall, has it been relatively smooth or did you struggle a lot along the way? How much do you attribute your struggles to being transgender?

Arisce Wanzer: It was definitely a struggle along the way. I came out as trans when I was 19 in 2006 and was already modeling at 17, and though moving onto the women’s modeling boards was pretty seamless, I couldn’t really disclose that I was trans at every job, so I wasn’t able to get a lot of opportunities other regular cisgender models could get. People didn’t see me as marketable. The trans movement was not popular, was still the butt of the joke, and was seen as a mental illness. I could model, but couldn’t let anyone know what the tea was.

Gracie Cartier: At the end of the day, we’re all in transition. We’re all transforming. I think that this has been one of the most difficult transitions and transformations for me because it has been one of deep profound healing. Had I not transitioned into the woman that I am, I wouldn’t have gone to the next level of spirituality and understanding of who I am first and foremost.

Mz Neon: I’ve considered my identity and my performances to be more of an evolution than a difficult transition. I always felt like I never was born in the wrong body and I always just wanted to evolve with my gender. Eventually at a certain age I started taking hormones and it felt great. My body took to it pretty quickly and I started to feminise at a faster rate than I was expecting. I was so much happier. It did so many positive things for me mentally that I wasn’t even anticipating, so it’s been life-changing.

What business advice helped you the most to occupy the role you are in?

Zackary Drucker: I think ‘dream big and work hard.’ [Working] is like swimming upstream to dream and see outside of the parameters of what you and society thinks is possible. If you’re able to dream beyond those limits and pair action with those dreams, anything is possible.

Love Bailey: I learned from John Waters and a quote he said saying, ‘Success is not having a single asshole around you,’ and I think along with my transition I was able to transition the people in my life that I’m working with. I’m a lot happier with the angels that I have that are helping me along the way.

Gracie Cartier: To be true to myself, my art, my craft, and my gifts. We live in a time where so many people are always seeking validation. For me, it would always be to follow your inner light and that inner guide within you. Sometimes you may be misunderstood and others won’t get you, but as long as you stay your course and find your tribe, people that see you, will see you.

Any mentors or credit you want to give to anyone outstanding who helped your career?

Love Bailey: My showgirl grandmother bestowed this idea of your life being your stage, and the meaning behind ‘show time.’ That’s why I came up with this idea of bringing all these trans goddesses to Los Angeles, because we’re all doing the hustle and have our own career path. Media portrays us as hookers, but we have a lot more to say, and this type of female empowerment will be something to inspire others. That’s why I’m here.

Mz Neon: I was very lucky to have spent my formative adult years in New York City and met so many strong powerful women there. A lot of whom I’ve looked up to growing up and came to know or meet later in life and have given me resources to get where I am today. People like Lydia Lunch, Courtney Love, Kembra Pfahler, and Flawless Sabrina are performative strong women I’ve looked up to. I was also nurtured by the ball culture and the House of Fields, and I really appreciate all the guidance that was given to me by those women.

Daphne: Well I just started the first trans-inclusive strip club night at Cheetah’s, and two people that were really instrumental in this process were two of my mentors, which were Jordan Kensley and Bella Bathory, who are very involved with the Sex Worker’s Outreach Project (SWOP). As for women in my profession, Indya Moore is doing amazing things and speaking up for marginalised people and expanding everyone’s concept of the gender spectrum.

How has the presence of transwomen (or cis-women) working in your industry changed during your career?

Arisce Wanzer: The presence of trans women working in the modeling industry has changed… hugely. We got girls representing our community like Teddy Quinlivan and Hunter Schafer, shows like Euphoria, Pose, and I’m the first trans woman to ever be on a national pharmaceutical campaign for Truvada. [Trans women] were not allowed on TV unless it was Maury Povich or Jerry Springer just 10 years ago. I very much remember how the media presented us, and it was not as accepting or anything desired.

Daphne: I joined a pole studio and Jordan Kensley ended up becoming my mentor, and since we’ve met, she’s been so embracing by speaking out for sex workers and just being an open-minded and queer friendly individual that inspires a lot of my dancing. Bella Bathory has also inspired me to be a community leader, utilise transformative justice, and set an example for other girls whenever possible.

What growth for transwomen (or cis-women) in your industry is needed?

Gracie Cartier: There’s always room for growth. The growth for trans women is to understand the many different types and facets of a trans person. We all have different dreams and goals, whether it’s aesthetically, mentally, spiritually, or physically, and we’re all here for a specific path, so I’d say to embrace your own trans jeuge, honey. Whatever that is for you!

Luna Lovebad: I feel like now in this day and age, there’s so much room for growth. Especially because there’s a lot of us out there that are trying to do the damn thing in so many different areas. There’s so many different voices, stories, and experiences to be heard, and I am really excited about that. No one’s trans experience is the same. There are similarities, but the differences are important.

Are there advantages to being a transwoman in 2019? What new opportunities do you have?

Zackary Drucker: I think it’s the best of times and the worst of times, right now. The conversation about trans bodies has gone from the fringes to mainstream politics and needs to be expanded on towards people who are ignorant of gender diversity. I also think we can’t separate the struggle for trans liberation from racial justice because I think the combination of racism and trans-misogyny created an impossible situation for trans women of colour to survive.

Arisce Wanzer: The advantages of being trans in 2019 are there, and they are growing. There are more and more parts to out there for television, commercial, and movie roles that are developing. Nobody used to write any roles for us, and we’re finally being normalised to the point where girls can get more opportunities to work. Job placement unfortunately is still a problem for the trans community and has the highest unemployment rate for any demographic, but I’m proud to see the progress that’s been made to change that.

How do you effectively use social networking?

Daphne: Oh god. That’s a tough one. I definitely learned that it’s important to listen to my body and take a break whenever I feel like I’m burning out from social networking. In our society, it gages everyone’s worth and forces everyone to constantly be on the go, constantly be posting, constantly be like ‘look I’m doing this, and this, and this.’ It’s okay to enjoy nature and go explore reality. For Pride this year, I was part of a retreat to Joshua Tree, and it was so beautiful to sit under the stars, be surrounded by queer sex workers, and just have a moment to be present and feel empowered by each other’s presence.

Luna Lovebad: Being a child of the internet definitely helped me in the sense where I was able to use social networking to meet other trans girlfriends in the industry and in Los Angeles. It really made me realise that there are a lot of people that don’t have the courage or platform to share their trans experience, and me having that platform made me learn to use my following for good and to help other people. I really try to use social networking to help others that are marginalised, whether they be queer, immigrants, and or people of colour. Being the daughter of two parents who are from Mexico and immigrated here, it’s really important for me to share that experience and help others.

Do you have any anecdotes for mentorship and apprenticeship? How do you pay it forward for trans people in your community?

Zackary Drucker: I think you just pay it forward. I think that’s it. You should seek out people and start your day with the intention of finding people you can easily help, and it’s an intention you have to set.

Gracie Cartier: You can pay it forward by just showing up. You never know who’s watching you, who’s going through the same internal struggles and battles of acceptance. Think what work could you give? What encouragement can you give? What clothes can you give to a girl? You can do so much by helping a woman become someone better.