Trans Day of Remembrance: looking ahead to a future of trans liberation 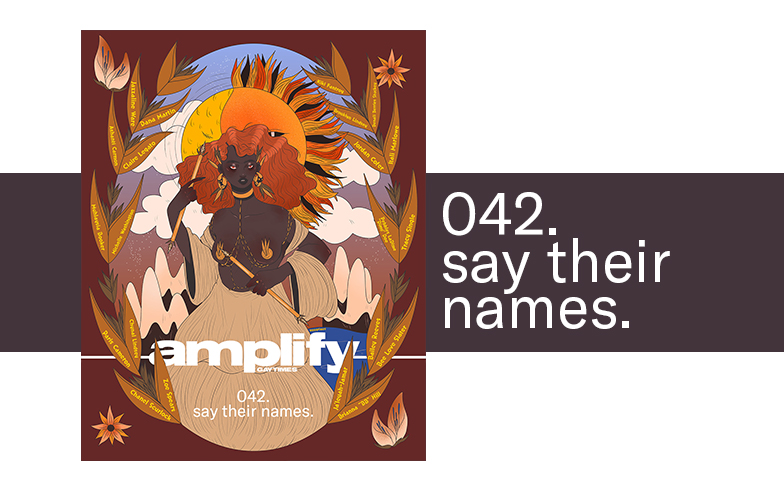 Transgender Day of Remembrance is not just a day to mourn, it is also to celebrate trans lives, trans histories, trans courage, trans strength, and look ahead to a future of trans liberation.

I purse my lips too vigorously and a fudgy layer of lippy smears onto my front teeth. A few tissues later and I gaze into the mirror for the final time before leaving the safety of my room. My face is stunning, a 50’s damsel-in-distress with pointy cat-eyes and Elizabeth Taylor lashes. They’re ready.

I make the 100-meter walk from my door to the Stepney Green underground station donned in a pleather bustier, pleated to cup my chest. Tight-to-the-skin trousers slurp as I move. Boots with a 3-inch platform take me to over 2 metres tall, apparently somewhat of a spectacle.

Stares upon stares are directed at me, a teenager discreetly Snapchats a video, a group of men laugh and groan “what the fuck is that”. My headphones blast Lizzo’s ‘Truth Hurts,’ only partially shielding barbed words.

This walk shouldn’t be a radical act. But until we address the scourge that underlies transphobic violence—100 meters in a trans body means a whole lot more.

November 20th is Trans Day of Remembrance, a tradition started in 1999 by and for the trans community after the murder of African-American transwoman Rita Hester. 20 years after the first time we collectively memorialised victims of transphobic violence, we’re still lighting too many candles and reading lists of fallen trans people, the pages shaking like leaves in our hands.

As I prepare to read a speech at a Trans Day of Remembrance vigil this week in London, I can’t help but anxiously fuss over what I’ll wear. Not only because looking like a boss b*tch is my prerogative (free Britney!) but honestly, I’m frightened.

As a mixed-race transgender non-binary person, I face a dangerous reality every time I leave the house. In the last few months alone I’ve had death threats on the street and on social media, been filmed on phones by strangers without consent, and experienced countless drive-by coward calls.

After speaking at London’s first Trans+ Pride parade, I was assaulted on the underground. As I was berated with ‘batty boy’ and my phone was smashed by a group of small-minded and ham-fisted boys, a white man sat and watched, simply staring at the carriage walls, praying for forgiveness.

I acknowledge my forms of privilege including being able to afford a car to and from venues and the option to resemble a cis man instead of a boss b*tch if need be. But making the daily decision between living in safety or living as my authentic self saps the energy from the deepest parts of me.

The ways trans people are affected by systemic transphobia varies across the globe but is nonetheless devastating in every case. Trans people are murdered at shocking rates when compared to their contemporaries. There have reportedly been 331 trans people killed in the past year, 331 too many.

Hate crimes against trans and non-binary people are on the rise, and we face a political climate where trans issues are discussed as if trans people are becoming an issue instead of at the mercy of a world where they are told they are not supposed to exist.

Violence is not the only way trans people are let down by the systems, structures, and institutions around them. We also must be aware of difficulty accessing necessary health services, negative mental health outcomes, a lack of rights such as the ability to legally identify as their gender on passports, unconscious bias in the workplace, and the intersections of race within each of these manifestations of transphobia.

At every opportunity, we must remember that people of colour, particularly black trans women, are disproportionately negatively affected by each of these forms of oppression.

Trans Day of Remembrance is the culmination of Trans Awareness Week, created to make the world cognizant of issues afflicting trans people. The world is seeing an unprecedented amount of media related to trans people. All press is good press, except… when it’s the opposite. The way trans people have been referred to in the media in the past year has been willfully ignorant at best and inhumane at worst.

One could conceivably read some of these articles and wonder if trans people are a dangerous alien species instead of the boss b*tches we are. It appears that trans rights are human rights only if we’re being trans somewhere quietly… not smashing world records, appearing on ground-breaking television series, or fronting magazines.

The world is becoming aware of us. But when does awareness become safety? Often the most read articles on Facebook are those from right-wing media outlets delegitimising trans identity. And let me tell you, after I was sucked into the sinkhole once or thrice, don’t read the comments if you’re trans.

Growing up, my father would come into my room yelling the latest sensationalist headlines he had read that day. “Radam! Eat your veggies, otherwise… bird flu.” The comment section is filled with my father-types, and it’s irresponsible to recklessly report about hyper-vulnerable minorities to an impressionable public.

Media outlets that share transphobic propaganda must consider the direct links between the words spattered on their pages and the transphobic violence we face daily. These articles provide transphobia with a chance to manifest in water-cooler conversations, creep into our education system, and gives credence to bigoted minds and the power to spit at trans feet.

Unfortunately, transphobia doesn’t exist only within “heterosexual culture”. It’s been two years since I came out as non-binary and I expected to be welcomed into the LGBTQ community with open arms. However, I was frustrated to find that the bigoted attitudes particularly in relation to the intersections of race and gender were just as deep-rooted here.

In the United Kingdom, the LGB Alliance has recently formed, with one clear goal: organizing to remove the T from the acronym. To have a group of people hellbent on erasing your experience is terrifying, to say the least.

I have found dating in the LGBTQ community to be rife with transphobia. Cis men on dating apps will ignore, filter, and block anyone who does not display gender in homonormative ways (“masc4masc culture“ is as popular as ever). Since Grindr has introduced the ability to list your pronoun and gender identity, I’ve experienced messages such as “You are a man. Stop kidding yourself”. Many will use the pronouns feature as a joke, not recognising how crucial the ability to choose how you are referred to is to trans and non-binary identity.

Gay media (no offence, thanks for hiring me GAY TIMES!) can do better, too. In a post Drag Race world, many publications prioritises paying, uplifting, and highlighting cis male white homosexuals and stay silent on the transmisogyny coded into the language used by these people and programs.

When high-profile celebrities come out as trans or non-binary, the LGBTQ community shows support. Otherwise, it seems they wait until a tragedy occurs or the date is right to care. 20,000 people rallied for a now-successful marriage equality campaign in Northern Ireland. Where is this same energy and outrage for the 331 gorgeous souls taken from us this year due to trans violence?

Trans has been weaponised as a term, outrageously linked to disease, paedophilia, bestiality, and aggression but rarely beauty. Transgender Day of Remembrance is not just a day to mourn, it is also to celebrate trans lives, trans histories, trans courage, trans strength, and look ahead to a future of trans liberation.

The rise in data available to contextualise transphobic violence is crucial but is not everything. Trans people are not just statistics, we are existing. When we remember the people that have come before us, we must not forget that we are here now.

I implore you to act in the name of what those who have fallen stood for: the chance to feel the warm glow of love and to give love freely, control over our bodies and comfort within them, respect for our culture, spaces to be accepted and equal opportunity to thrive in these environments.

As we discover ourselves and begin to appreciate every little bit of what we find – the more the world tells us to stay in line. I was eight when I knew I didn’t fit into the traditional narratives of gender dictated by the thing in my pants, but also already sensitive to the ways in which we are told again and again that we aren’t born correct.

It took 16 years to allow myself the space to explore the idea that I could be beautiful, to understand that the yearning feeling in my gut when I saw myself in the mirror was legitimate. We are not simply a disparate list of things, of ingredients, of characteristics that can be summated on paper. Trans people are made of multitudes, inside and out. No one of us is the same, but we are stronger together.

I myself was ignorant of the ways trans people were being oppressed before it began to affect me personally. We must all do better. For trans people to thrive in their worlds, we need to really believe that trans rights are human rights. We forget that human rights don’t just include laws, but a human right is to be treated with love and respect. Human rights have failed us on all accounts.

Supporting trans people in 2019 can come from an array of sources:

The list of trans people we read on this day should not exist and we need your help to make that happen. It should not be for those under the thumb to bend the hand that strangles them.

November 20th is an innocuous day for many, but for the transgender community it is a solemn coming together to remember our slain kinfolk. It is incredible that trans people have created a week to exchange tools, information, resources, love and support to help us survive.

Today and every day, I am standing not on the shoulders of self-proclaimed cis male heterosexual giants, but on the backs of trans spirits, of trans ancestors, of trans legends, of trans brothers, lovers, sisters, sons, daughters and non-binary individuals.

Today and every day, be aware of our existence, the fact that we’ve always been here despite myriad forms of erasure. When I speak later, I am going to wear the brightest, most voluptuous boss b*itch skirt in my closet and complete another radical act in the hopes that one day this won’t be so radical.