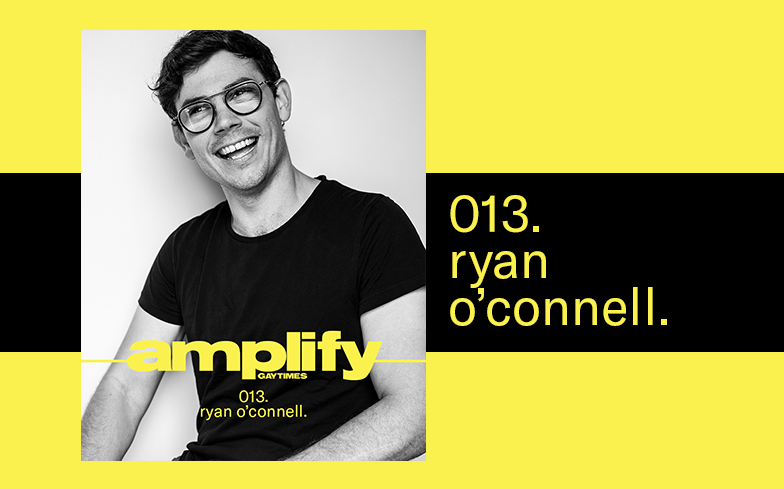 “I’ve been completely overwhelmed by the love and support I’ve had from the disabled community,” Ryan O’Connell tells me on the phone direct from New York where he’s been plowing through interviews for his groundbreaking new Netflix show Special – proudly hiding no part of his queerness or cerebral palsy in any conversation.

“It’s been really, really surreal to be honest! I feel like I always believed in what we were doing and what we made, but to have people as bowled over as they are is incredibly emotional and surreal,” he says. “The messages I’ve been getting from people who are disabled, and gay, or gay and disabled, or just even not is overwhelming and I can’t wait to unpack it with my therapist!”

Written and led on screen by Ryan, the eight excellent 15-minute episodes take inspiration from his 2015 memoir, I’m Special: And Other Lies We Tell Ourselves and features a partly-fictional version of himself. Produced by Jim Parsons of The Big Bang Theory, Special has gone global with fans from across the world going crazy for Ryan O’Connell. And while he’s game for it all, there’s a serious message as well: Giving young queer and disabled people the role model Ryan looked for, but never found.

“I don’t remember seeing any kind of representation with gay and disability,” he recalls. “There isn’t anything out there so I felt like I had free reign to do what I want, and because it was coming from somebody who actually experienced it – that’s the ultimate power. It’s really hard when disabled stories are told but they aren’t told from the view of an actual disabled person. It feels like people are really eager to profit from our pain without giving us any actual opportunities. I feel that’s how marginalised people stay marginalised. The only way they can get out of that is through opportunity, money and power.” And that level of representation circles around Special’s leading character of Ryan – a young boy facing the world of work, love and prejudice. Ryan’s as imperfect as the rest of the world, and that’s something the creator is proud of.

“What I like about the character of Ryan is that he’s deeply flawed. There’s a line in the show from his mom’s boyfriend Phil, who says, ‘He’s being an asshole’, and she goes, ‘He has CP’, and he replies, ‘People with CP can be assholes’. True equality means we are all allowed to be terrible. I feel like disabled people have to be virtuous and they have to be inspiration porn, and I like that Ryan can be a little brat. He can be petulant. He can also be funny and warm and loving. He can be all the things like anyone else in the entire world. I feel very happy that I got to create somebody who is a minority but is also incredibly multifaceted and isn’t always doing the right thing.”

With great power we know comes great responsibility, and none more so that being given a key into the lives of any Netflix subscribers. While Special aims to challenge stereotypes and the lack of representation in television, it is ultimately one person’s experiences of being queer and disabled. Ryan’s story, both personally and through this character, isn’t there to speak for everybody, but somebody.

“It was really intense because I was speaking for a community of people that don’t have many opportunities to tell their stories. I’m one of the first people who get to do that and so there is an immense amount of pressure to not let anyone down,” he continues. “You also can’t tell a story that represents every single person as that’s truly impossible. Just because my story doesn’t directly represent theirs, they still find it moving and personal to them, which is incredible!”

Venturing into the world of blogging and storytelling, Special follows Ryan – yes, his lead character also shares the same name – as he grows up, moves out and tries to move on with his life. With his mother (the delightful Jessica Hecht) still trying to protect her little boy while she looks for love with a new neighbour, his ever-growing confidence with his sexuality, his new work colleague – played impeccably by Punam Patel – and his disability kept on the DL, the whole vibe is perfect for a Netflix success story. Yet with a teaser trailer close to peaking 1 million views and the world unsurprisingly longing for a second season (which we’ll get to shortly), why has it taken so long for a mainstream platform to pick up this story?

“I think the beauty of being at Netflix is that they don’t give a shit,” Ryan tells of the streaming platform’s openness to telling stories so often seen as ‘other’. “They let you do what you want. As the creator, you have carte blanche and that’s empowering and very, very unusual.” And the one thing fans (and the press) have been talking about a lot is that sex scene featuring Ryan and a male sex worker he’s hired.

Related: Marina on why she wanted to “quit” music, and what changed her mind

“I don’t think people have seen a sex scene like that before and that was part of the problem,” Ryan tells us, with frustration in his voice. “I was very deliberate with that scene. I wanted to show sex in an honest, authentic way because I feel like gay sex has not been represented. If it has, it’s Queer as Folk and they’re fucking in a bathroom, or they’re looking to the moon in Call Me By Your Name. I really wanted to show something that felt honest and true to my experience and my gay friends. I was shocked that it hasn’t been done yet. When something hasn’t been done yet and I know it to be true, I get confused and frustrated. Why is this groundbreaking? This should be normalised now.”

Off the market and in a relationship for over four years, a large part of Ryan’s insight to dating in the queer community has come through discussions with his friends, prying into the interactions they’ve had with their Grindr hookups.

“I haven’t really been on the apps because I’ve been in a relationship for four-and-a-half years,” he says. “I mean, I am on the apps, but I’m not… do you know what I mean? All my friends would be like, ‘I was getting coffee today and I realised that I’d fucked the barista like three years ago, anyway.’ Wow, what a tangled web we lead as gay men. I knew it was something that everyone had experienced and so funny. I just love it! You can’t place the face and then you realise I was exchanging dick pics with them two years ago. This stranger has a picture of my erect penis and now they’re serving me coffee. Okay. The gays of our lives.”

This authentic approach to storytelling which touches upon real lived experiences is why the show has resonated so widely with LGBTQ people – no matter where they are in the world. Through social media, Ryan found this out very quickly.

Related: Ra’Jah O’Hara on her “rough” Drag Race experience and who she would’ve done for Snatch Game

“Hunni, let’s talk about gay men in Brazil,” he laughs. “I’m convinced everyone in Brazil is gay and never wearing clothes. Literally my DMs have just been gay men from Brazil. I’ll go on their page and it’s truly like an adonis. ‘Brazil, love you xo’. What the actual fuck is this place? Is it truly just a utopia of barley clothed gays living, laughing and loving and watching Special on Netflix? I don’t know but I definitely need to go there!”

As for a second season, Ryan is on board and ready with Special’s first new storyline. Enter Kim.

“Kim will, if we get season two and longer episodes, be given a real emotional arch outside of Ryan,” he teases. “That excites me. I want to know what she does once she gets home!” Hopeful that Hollywood and the rest of the television world will now take note, it’s without question Special has paved a new way for those from within marginalised groups to be represented in the mainstream. “One in five people identify as disabled, that’s 20% of the population and I can only think of like three or four shows that showcase disability,” says Ryan. While it presents one person’s perspective, we all – straight, gay, disabled or not – are better for its creation. And until all queer disabled people are given the same opportunities to be visible like our straight, able-bodied counterparts, Ryan O’Connell is going to use his new public platform and voice to fly the flag unapologetically for every queer disabled person out there.

“I would love to live in a world where everyone is equal and have the same opportunities but aren’t there yet, so until we are I will do my part,” states Ryan. “I feel vindicated because the story I was telling was a universal one, it just came in a quirky disabled package, but when you strip away the wrapping paper, it’s this universal sitcom that’s relatable and everyone can latch onto – and the response has proven that.”

He adds: “I hope my show is the tip of a very, very long history of disabled shows. I really hope this is the beginning.”

Special is available to watch on Netflix now.