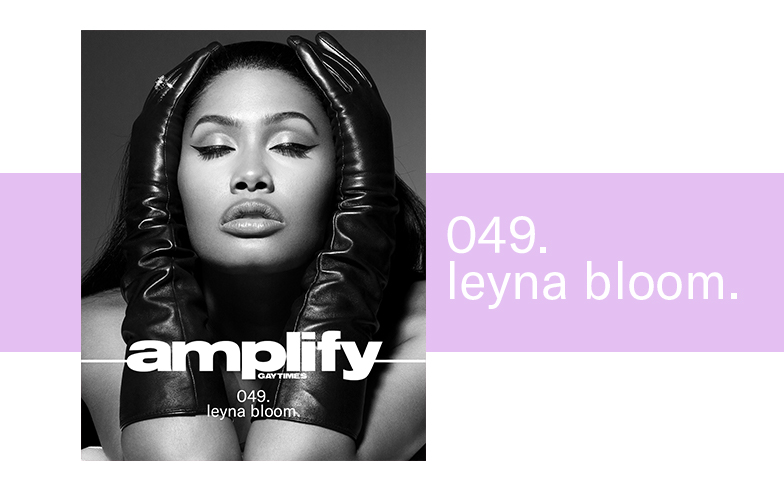 The American dream and rising starlet of the silver screen, Leyna Bloom is a formidable quadruple threat. Dancer, Model, Activist and Actor, Bloom has defied the odds to storm the industry in style, demanding trans representation in all corners of the arts.

Leyna Bloom is smiling — just take a look for yourself at her Instagram, there’s a wide grin, in every couple of photos, with teeth. But, what does Bloom have to smile about at only twenty-five years old? Her many talents, of course. This year she made her debut at the Cannes Film Festival, the oracle of the film industry.

At the two-week-long film festival there’s a category called Un Certain Regard, which simply translates to ‘from another angle’, which perfectly sums up Bloom. Her angle is that she’s naturally multifaceted, but also because her father’s advice has always been, “Just know that you’re black, you’re trans, and you’re poor. You’ll need to fight and work harder than others.” A trained dancer, model, actress and activist, to this day — there’s no ‘turning’ in Bloom’s career. She plays the part of Wye in Danielle Lessovitz’s debut film, Port Authority. Bloom is a bit of an unconscious-bucket-lister from what I gather — she’s the first trans woman of colour to appear in Vogue India and be in a leading role at Cannes. It’s on an international stage that Bloom’s film has gained clout, proving that trans stories are beyond the narratives of big capital cities.

“I think it’s important that I use it as a business outlet, and not something personal,” Bloom says of creating boundaries between herself and her social media, where she has 180K followers on Instagram.

While the internet has become the starting point of where members of the LGBTQ community cross paths to share ideas, seek comfort and rally together, but it has also become a black hole of impostor syndrome. Bloom has always relied on her father’s advice, recalling that, “he would always preach about how it’s important to be your most natural self, and that being this way is beautiful, so it’s something I’ve always had on my mind.” Bloom points out that her modelling career is not just about creating beautiful imagery, but it’s about being an “activist, freedom fighter, and who wants to build fashion stories around that. That’s how my modelling career works.”

You started your modelling career in 2014, do you remember what your expectations of the industry were before you started? Have your thoughts on the fashion industry changed at all?
I started being recognized as a model in 2014, but I started to model way before I came out as transgender, and this was because of safety reasons, to protect myself. My intentions to join the fashion world as a model were to become a representation of myself, people who look like me, and who live like me. I wanted each moment I was a part of to give light to a space that was not filled yet, and give light to a certain way of living and being, and a certain way of thinking – it had to be on a politically correct terrain. The fashion world is corrupt, and if I’m going to do anything involved in the modelling world – all the jobs and clients I work for – it has to be involved in deconstructing their brand to be more inclusive. Otherwise, I would just rather work with up-and-coming designers who are representing inclusivity from the beginning.

You’ve worked with the likes of Steven Meisel and have been featured in numerous fashion titles so early in your career, tell us about those moments and the sentiment they hold.
It’s a blessing to have worked with some of my idols. I couldn’t have ever imagined being in the position of receiving an email from Steven Meisel’s team, asking me to be part of a campaign. That was a wild moment for me. There have also been other clients that I’ve worked with where it’s been very humbling to think that I was once a child who read fashion magazines and dreamt of being part of that one day.  I think it’s important that I stay grounded and to work in a way that is historically impactful. If I can be a trans woman that is the face of a campaign shot by Steven Meisel, it’s a huge moment for all trans people. Personally, I think it’s also a “screw everyone that doubted me” moment. I’m not trying to be what the world wants me to be, I’m just being myself.

How do you think your career as a model has informed the rest of your career?
I started off as a dancer, and I used that as a stepping stone to get into modelling.  Then, modelling is what got me into acting. So, each is a different chapter. Modelling has placed me in rooms where a person like me wouldn’t normally be in. For me, modelling is more than just being a model. To me, it’s more of a demonstration of who I am, what I stand for and what I represent in my community. There are models that just model, and then there are models who are activists, freedom fighters, and who want to build fashion stories around that. That’s how my modelling career works. Before 2014, when I wasn’t out of the closet as a transwoman, I was working as a model who only modelled, and my job felt very repetitive. I view modelling as something very different now and think that modelling and activism go hand in hand.

You’re hailed as one of the cool girls, how aware are you of that?
I actually think it’s very vain to call myself a cool person. I’m still struggling as an artist, as an activist, and as an actress, so I don’t think I’m cool, I’m just courageous. I think being cool is boring – to have courage is lasting.

How do you create boundaries for yourself with social media?
Social media is very serious to me because it’s a place where I can reach a huge audience. I have to be very particular about what I put out into the world because anything I put out there can potentially go viral. I think it’s important that I use it as a business outlet, and not something personal. I especially have to be conscious because of my own image and the community I represent. If I could, I would want to rebuild the idea of what social media is and what it should be used for, because right now, there’s a lot of poison and toxicity wrapped around it.

What are your hopes for change in the industry? Can you feel progress being made?
I was born in a world where I didn’t fit in, so I think for me it’s about staying true to myself, and being conscious about what I do to make sure it’s impacting the world in some way. I’m constantly looking for people to work with who are trying to figure out how they can change the world. I do believe there has been progress, but I think the pace of the progress is extremely slow. I think there’s a lot of people who don’t want to see progress and for people like me to have these moments or these conversations. But these people make me wake up every morning and think, ‘I need to hurry up, and do something.’ I hope that if I died tomorrow, I left something on this earth that people can live off of for decades to come.

Being a healthy role model in terms of body image is clearly important to you. Why?
When I was younger, I hated my body, I hated looking in the mirror, and seeing the person staring back. When I got to an age where I could make decisions for myself and for my body, I was liberated into loving myself. I realized that this is my tool in changing the world. Growing up and seeing how my own body developed, and how it’s something you can’t control and accepting that this is how I am, this is how I was born, and that this is what makes me unique.

You frequently post no-make-up selfies on Instagram – is it important to be open and honest on social media? Are you ever tempted to self-edit?
Growing up, my dad always preached about how it’s important to be your most natural self, and that being this way is beautiful, so it’s something I’ve always had on my mind. I think being your most authentic self on social media is also important because you want to be a representation of what you are in person as well.

What response have you received since starring in Port Authority?
I’ve gotten a lot of humbling responses on an international level, and I just really want to get the film here to the US. A lot of people still don’t know about the trans or ballroom community, and this film is a beautiful introduction.

Being a trans woman of colour in a leading role — what does that mean to you? Did you have any doubts about the role?
It makes me wonder why it has taken so long to tell a love story like this, and I hope that in the future when I’m presented with more opportunities like this, the script doesn’t need to say that the character is trans, and that I can just be the character. I did have some doubts about the role in the beginning, but at the end of the day, I felt comfortable and I felt that I was being heard and seen. I also related to the character and knew I could help the story.

Do you feel like you’ve developed a tough skin since starting in this industry? If so, how? And how did you navigate it at the beginning?
My dad told me about this industry when I was a kid. He explained to me, ‘OK, you want to be in this business? Just know that you’re black, you’re trans, and you’re poor. You’ll need to fight and work harder than others.’ So I already knew from a young age that I’d get a lot of ‘absolutely not’ and people laughing at me. I just had to keep on going, and have faith that there are people in the world like Damian Bao, the casting director of Port Authority, and Danielle Lessovitz, the director, who want to see me shine and who want to work with me.

We’re living in a time in which we’re seeing both brands and celebrities take a stand for the issues they believe in. What issues do you wish brands and celebrities alike would shine a light on?
I think we need to shine a light on the people behind the camera. The ones who are really putting in a lot of work because they put in equal if not more work than the people in front of the camera. These people also have dreams, desires, have been fighting and educating – they’re really the silent heroes that society doesn’t see. People like the writers, and the hair and make-up people. The people that bring us together and have these ideas.

If you were a world leader tomorrow for a day — what one thing would you change first?
I would change the educational system. I think it’s outdated completely, how people learned years ago is not how people learn today. Especially with social media, I think we need to figure out a new way to engage this generation and the generations to come. Growing up, I wish I had an art teacher that was a drag queen, or a trans teacher who taught me about anatomy. Instead, I had to move to another city to find that sort of authenticity.