The rising star reveals how they’re driving fresh representation and using their artistry to celebrate diversity. 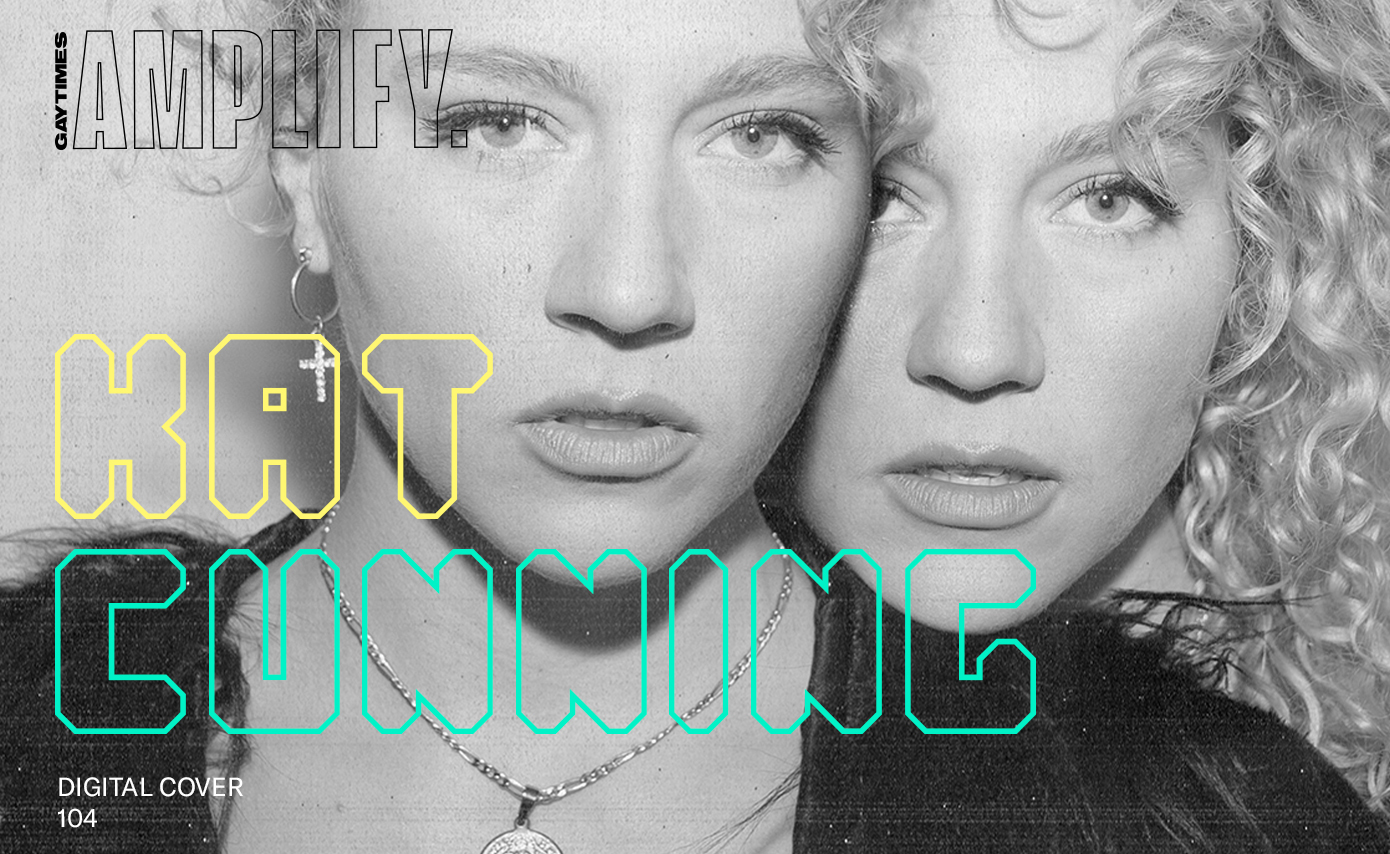 Kat Cunning is dedicated to learning. “I caught up to a lot of things about myself that would have laid dormant if I didn’t have this time,” they tell GAY TIMES. The Broadway star, actor, and singer-songwriter is holed up in Miami, ahead of a show at the Faena Theater hotel, and is currently adjusting to falling back into a normal routine. Now away from the thick outdoor humidity and unnerving LA crowds, the artist has found time to look inwards. “I definitely learned a lot more about my gender and how I identify. For anybody who’s even paying attention to their gender, it’s important to keep learning and growing every day.” Like most, Kat sought out space to self-reflect in the midst of the pandemic, especially after breaking up with their partner of five years and choosing to move away from their dream city, New York. “I’m still learning about my own artistry and having to change my relationship with music,” they explain. “But, personally, I recently gave myself permission to identify as transmasculine and non-binary.”

As the singer journeyed onwards learning more about themselves, the vision and self-discovery of transmasculine joy surfaced in their saccharine and powerfully sentimental music video for the single, Boys. The video captures a vivid sense of community and self-assurance amongst Kat and a group of trans people. “In making the song Boys and releasing the music video, I was able to talk to a lot of other transmasculine people and discover a lot of literature on what it means to be trans masculine,” Kat recalls. “While I’m not ready to go with [the pronouns] ‘he/him’ and experience looks every single day and I’m also not fully a man, I learned a lot about myself. It’s important to keep going because the information is growing every day. It’s a deeply personal thing that we then have to put into words for other people to understand.”

While the artist likes to use their platform to dig into the nuances of gender and identity, they are mindful of the emotional fatigue that can come with the territory. “It means having to disclose that you’re non-binary or trans every time you walk into a room or you get misgendered. It’s one or the other,” they outline. “It definitely gets exhausting. I also definitely protect myself. I try to be a platform that helps people feel like they’re not alone. I know that if I’m going through stuff that’s likely echoed in my community, especially in mental health.” That said, the artist assured us they also find it “cool to talk about” the intricacies of identity. Like most things, it’s about the appropriate time and place. “The traditional way to define being non-binary is that you live outside of the binary and that’s not entirely true for me. I kind of fucking love the binary. I love the silhouette of men and I love the silhouette of women, and I just think we shouldn’t be stuck in them,” they expand. “I think we should be playful with them and, unfortunately, they have a lot of power in our society. I am politically against the binary, but aesthetically I love the binary. The transmasculine side of me loves the traditional concept of a man which also resonates with me physically too. So, for me, to be non-binary and go as ‘they/them’ is a happy medium that communicates to everyone in the room that I’m not quite what you assume I am and to respect that I have a nuanced relationship to gender. I’ve taken little steps telling my friends and finding safety in communities to talk about it.” 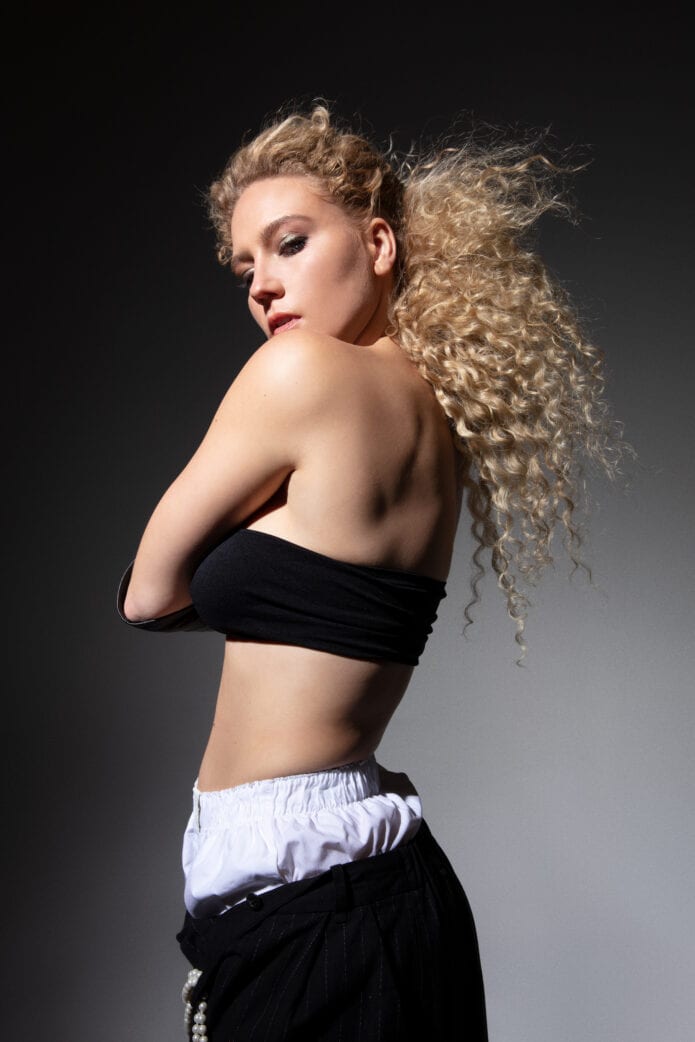 As a broadway feature and burgeoning actor, Kat hopes to see a transformation for the LGBTQ+ community outside of just the music industry. The Trinkets star has played their part in fashioning queer storylines, but they’re ready for sweeping change across the acting scene. “I feel that trans masculine people are underrepresented. We’re finally starting to add the ‘T’ of LGBTQ+ into every Pride campaign you see everywhere. For the most part, transmasculine people are not even in these stories at all,” they tell GAY TIMES. “We had a couple in The L Word because they fit into lesbian stories. But other than that, I’ve seen so few conversations about trans masculine people. So, in Boys, I wanted to write to the people that I see and love that are my heroes. It was a love note to those people.” What began as a homage to trans visibility soon, unintentionally, became a message of comfort for themselves. “I’ve come to realise that I wrote the song also for myself almost as a premonition for my life. The video shows people trans joy and trans men,” they say confidently. “Transmasculine erasure often comes due to the fact that we’re not shocked when we see women dressed in a masculine way. It’s often written off as androgynous girls, so I felt it was really important to have a lineup of people living their best lives being themselves. Sometimes it’s radical enough just to show trans joy.”

Moving forward, I asked the triple threat creative what they would like to see from the acting industry when it comes to LGBTQ+ support and visibility. “When there’s a transmasculine person in a TV show, I don’t want it to be an exploitation of what their sexuality is,” they answer without missing a beat. I want to see trans masculine characters who identify on the binary appearing as boys in stories where we don’t end up talking about how they have sex, what their genitals are doing, or what hormones are like for them.” Clearly exasperated from the same reiterated tropes, the singer gestures animatedly: “Go on Reddit, go on Google and find that stuff out for yourself. Let boys be boys and let them act!”. Passionately continuing, Kat acknowledges the significance of a didactic plotline and the need for informative storylines, but hopes studios can lead on without the same tiresome stereotypes. “[Shows] need to stop fetishizing [and fusing] their relationship to their gender or their sexuality. Transmasculine didn’t transition to talk about their gender,” they say. “For me, I really want to see progress in terms of how we represent queer people in general. I want to see the representation of queer people that isn’t super fashion-driven or presentation driven. I want to erase the tropes of what queer people look like and I want to see queer people represent their stories, not their characters, and that comes from putting queer people in the writing rooms.”

The comfort of music and creativity has been an essence long present in Kat’s life. In fact, the artist they first encountered was quite unexpected. “This may sound really bougie, but I’m sure it was Tchaikovsky,” they laugh. “Tchaikovsky and classical music are so dynamic and that’s something that I want to work into my own music. I love the Baroque aesthetic and the grandeur of life and death in the ballet, and I want to perform that in a contemporary pop way.” Adjacent to their love for classics, poetry is another medium the artist is often enamoured with. Step into any Kat Cunning song and you’ll notice tracks awash with revisions of queer myth, legends and personal moments. “Poetry is the only other love of my life. Poetry was the only thing I did outside of dance when I was little. I hope my second career is poetry. It’s such a different thing than writing songs. You can say all the things you want free of structure and the cadence is so much more human than at a chorus. I’m committed to taking in a poem because it’s like vitamins for your soul. It’s a little dose of the human experience and they’re super important to me.”

Anchored heavily in the art world, GAY TIMES asks the singer what the realms of acting, broadway and dance have taught them. “The artistic world has taught me resilience, but I’ve also learned that from being a queer person,” they reveal. “One of our superpowers is resilience and the ability to be positive even when things are shitty. I’ve also learned that it’s possible to celebrate diversity. As a dancer, I met people from everywhere. The arts do celebrate diversity in a way that other fields don’t. Living as a singer-songwriter and an actor, the individual person is such a gift.” Speaking of resonation, the singer elaborates on how they hope their music and not just their acting can forge a connection with any audience. “I truly hope that the songs can resonate with anyone,” they nod. “I definitely could make the choice to make all my songs super explicitly gay, but I think my experience is the human experience. I like pop songs that don’t squander anything. I’m happy to use pronouns of my lover and to do things that truly identify the story as queer. I want my songs to have a Fast Car mentality where they resonate with people outside of the queer community too.”

Coming out of the dance world, Kat reckoned with having to fit in and, now, the artist wants to ensure everyone feels seen and heard. “I struggled for so long with fitting in. I had all the stereotypical issues of eating disorders and not having a voice. Ballet, especially, is a very feminine thing and my body was more muscular and curvier than everybody else,” they recall. “It was a really difficult transition to have dance be my whole community until you get to the other side of that judgement and you’ve done the thing you wanted to do.” After facing off the hardship of industry-wide norms, the performer treasured the value of growth. “The phrase that I always think of is ‘You can’t be a prophet in your hometown’,” they say proudly, emphatically almost. “You have to separate from the people who are watching you grow. Once you get away and you make something and you declare ‘This is me’, it’s so much easier for people to receive it. It was really important to me to have people declaring their perspective is worth listening to in order for me to find my voice.” And, finding their voice (and their chosen community) has been immensely valuable. “I love participating in the beautiful culture of inclusion that we’ve created and one of my favourite places where that manifests is the dance floor. I love seeing queer people show up and express themselves through dance. It’s the happiest moment for me when I see our community all gather,” they say smiling on the call. “As a minority, you sort of overlook all your other commonalities in order to come together. We all just choose to help each other out, because we know that we need each other. I love the resilience and the sense of community that we build in every city, whether it’s a tiny bar in Texas or the dance floors of New York.”

As the interview winds to a close, the singer turns the tables and curiously asks what we’ve got planned for Pride before sharing their own. “I recently wrote a poem on the topic of Pride,” they reveal. “For me, Pride is the absence of shame. Don’t give any power to people who don’t validate you and, for me, that’s a celebration of pride. You and GAY TIMES are actively doing something that truly changes perception. I look at what comes up on GAY TIMES daily and I care about this news that comes out. Queer people are listening, so you’re definitely making a difference, and I’m really excited to be a part of it.” 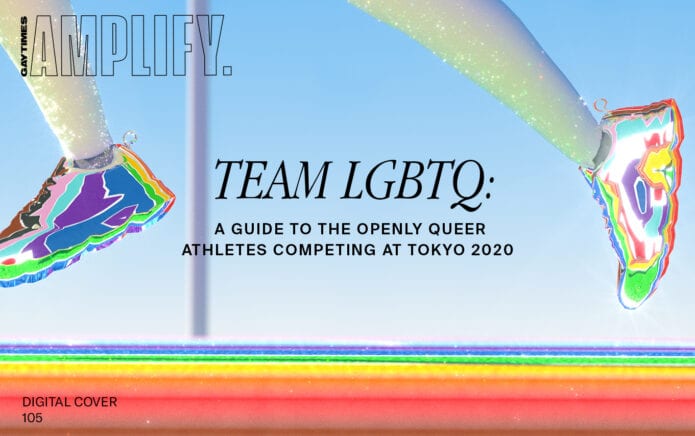 The number of out LGBTQ+ athletes at this year's Tokyo Olympics has more than doubled since the 2016 Summer games, and we’re here to celebrate that change.