Cub Sport on how living authentically is “the key to happiness” 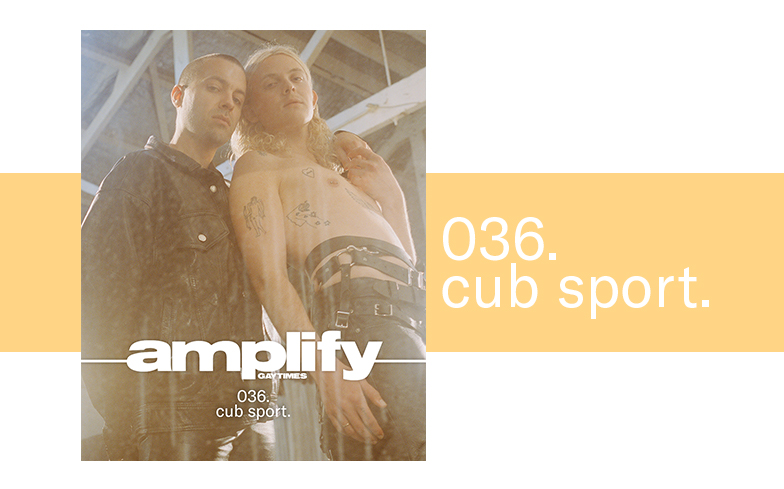 “I am not denying myself anymore,” Cub Sport singer Tim Nelson declares on Unwinding Myself; the opening track of their self-titled third studio album.

It was during the band’s second album, Bats, that the Brisbane-based singer-songwriter first started to open up about his sexuality on record. That collection was packed with the self-doubt and self-discovery that accompanies the coming out experience. The band’s third outing, however, is brimming with hope. At its core, the collection is about facing your inner self and ultimately living your truth.

“With this album being the first body of work I’ve written entirely on the other side of coming out, it feels like the truest representation of who I am,” Tim tells us on the phone from Australia. “It feels like I’ve peeled back more layers, and then getting to share that on the live stage and do that connecting with people all around the world is really special. And I feel like it’s enabled us to keep growing and it’s always really encouraging to see it helping people, and it’s helped us feel like we’re on the right track and feel good about being ourselves.”

Cub Sport started 2019 with rave reviews for their mixture of introspective R&B and synth-pop that serves as the bedrock for their self-titled third album. It resulted in them travelling the globe, playing their first headline shows in the UK, as well as touring North America. They will now return to the UK in October for another leg of the tour, playing one of the biggest overseas headline shows of their career at Scala in London. “We were reflecting the other day, that’s twice as big as the biggest headline show we’d ever done three years ago,” Tim says. “Even two years ago in Australia, we were playing to less people in our hometown than we are in London, which is so hard to process.”

The band’s early beginnings go back to 2010 when lead singer Tim formed a backing band for his solo material under the moniker Tim Nelson & The Cub Scouts. A few name changes and departing members later, the Cub Sport we know and love today came to be in 2014, consisting of Tim along with band members Sam Netterfield, Zoe Davis and Dan Puusaari. From there they continued to build their presence and fan base through their own independent label, and their debut album, This Is Our Vice, arrived in 2016.

Cub Sport’s continuing ascendancy has played out in tandem with Tim’s journey towards self-acceptance – and the four-piece sound so much better for it. The songwriting is vulnerable, authentic and emotional. It has also allowed them to connect with listeners on a deeper level. “Coming out publicly, with our second album, that started those sort of conversations with fans, and we started getting messages and that sort of thing saying how helpful people were finding it,” Tim says. “But I feel like moving us past that initial stage, it’s like a complicated journey coming out and realising that it isn’t like you’ve done it, and you’re all the way there, and you’re ready to be yourself. It’s an ongoing process and I feel like getting to write about that and express that through these songs, I think a lot of people have related to our own journeys.”

One recent song of theirs – Party Pill – is highlighted by Tim as a track to have resonated most with their fans. “That song is about when Sam and I first fell in love when we were 17, and it was such an incredible time for us, but it was happening in secret because throughout our whole lives we’d been taught that homosexuality was wrong,” he says. “There were so many things I thought would go wrong if we came out then. And writing that song was the first time I’d opened up about that period in our lives because we got together years later, but never really spoke about that first period when were together, but decided it’d be too hard and we wouldn’t be together. But I think singing proudly about a time I associated so much shame with, that was a huge thing for me. And I feel like getting up on stage and showing that we’ve come through the other side of that – where we feel so much better – that instils a lot of people with hope about falling in love in secret and wondering if it’s worth coming out.”

Tim and Sam’s love story resulted in them getting married last August, with the pair recently celebrating their first wedding anniversary. They laugh that they’ve spent part of their first year in matrimony sharing a bedroom with their bandmate Zoe, as they’ve been on the road playing so many shows. But the fact they get to celebrate their love on stage together is what has been significant for them. “The fact that so many of the songs are about our journey together, it’s quite a special thing to be on stage singing and playing these songs that tell our story together, and to do that all around the world, it’s been an amazing year,” says Sam.

The pair got married within a year of Australia passing their historic bill to legalise same-sex marriage. The vote passed after an incredibly divisive campaign in the country, that brought to the forefront deeprooted homophobic views from some parts of society. “We were really blessed to be surrounded by a lot of really supportive people,” Sam says when I ask about the impact some of the anti-LGBTQ rhetoric had on them personally. “And there was never a time when I personally felt unsafe, but I know a lot of the queer community weren’t as fortunate as us. So it was a great opportunity for us to recognise our privilege as cis white men, where people were open to what we had to say, and it felt like we could be a voice for other people in the community who weren’t in such fortunate circles to be supportive. There were still people close to us who spoke out against it, which is obviously a difficult thing to go through, but overall I don’t think we got the brunt of it as a lot of other people in the community.”

Nearly two years on has that rhetoric died down in Australia? Or are there still significant social challenges that face the LGBTQ community in the country? “I think there are still residual challenges,” Sam says. “I feel we encounter them less as we are somewhat in an echo chamber in the creative and artistic community, and we travel to places that have had a more established history of inclusivity to the LGBTQ community. So personally we haven’t encountered too much in the recent past, I feel like I remember just after the law had passed, when we were holding hands in the shop, people made an effort to smile and I remember feeling ‘Wow, this does feel different’ and I think knowing that the majority of Australians felt like we deserved to be married, and we were engaged at the time, that was going down, so it felt very close to the situation. It was literally are we going to be able to have a legal wedding or not? But I feel like I don’t think about it much anymore, which is probably a sign that the places we go it just isn’t a thing.”

When he was growing up, Tim didn’t even believe he would ever be open about who is, let alone marry the man he loves. In a recent interview, the singer admitted that being openly queer isn’t something he dreamed he could ever be. Now that he has come out of the other side and that is very real and beautiful reality for him, I ask him what he’s learnt about himself through that experience. “I think the biggest thing I’ve learnt about myself is that I’m worthy,” he says. “In my subconscious, from all the years of being told that homosexuals shouldn’t be allowed to get married, have kids, that life shouldn’t be easy for queer people, that was the message that had been dialled in. It took me a while to work past that. But more than ever I now recognise I truly deserve to be happy, I deserve to live openly with this person I love, and I think that’s the core message that I have taken away from the whole thing for myself.”

The fact that Cub Sport are coming through at a time where there is so much great emerging LGBTQ talent in music isn’t lost on them either. “There’s never been a more receptive world audience to lifting up the queer community and embracing people from all walks of life, and celebrating things for what and who they are,” agrees Tim. “It’s something that would have been incredible to have grown up with – this queer representation in music at all levels. Even underground indie bands and up-and-coming artists, that would have made a huge difference to me in feeling represented and being proud of myself growing up. But that’s one of the joys in what we do – that we get to be that for younger people.”

You’ll be glad to hear there are no plans for the band to slow down anytime soon. Although they have a handful of UK shows coming up, they’ve been busy working away on that fourth studio album. “I’m always writing songs, I think it’s my way of figuring out how I’m feeling and it’s the way I process everything that’s happening in my life,” says Tim. “So I’ve been writing songs the whole time we’ve been touring this year. We can’t say too much, but there is definitely another album on the way.”

With Cub Sport, you can rely on authenticity and vulnerability continuing to be at the heart of their songwriting. “I feel like it’s basically the most powerful thing anyone can do no matter what their profession or vocation is,” says Sam. “I feel that living authentically is the key to happiness. And I feel like it’s something that people instantly connect with.” Let it be known that Cub Sport are a living testament to that ethos.