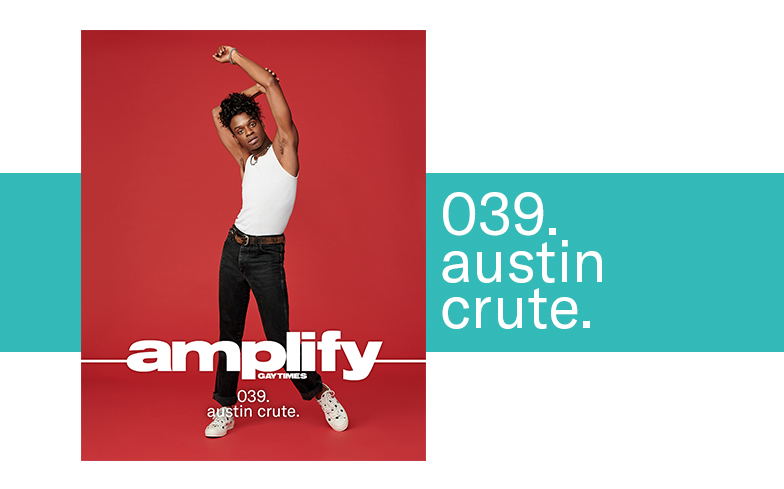 If, back in January, you’d told us our favourite queer character of the year would be a football jock-turned-pacifist samurai fighting to survive in a post-apocalyptic zombie wasteland, it’s fair to say we probably wouldn’t have believed you. But then came Daybreak.

The latest addition to Netflix’s burgeoning Originals lineup is a brilliant blend of Mad Max, Zombieland and Ferris Bueller’s Day Off (it even stars Matthew Broderick as a cannibalistic headteacher) loosely based on Brian Ralph’s celebrated graphic novel of the same name, with enough pop culture references to warrant several viewings. The show may focus on high schooler Josh Wheeler as he searches for his missing girlfriend in the city of Glendale, California, but like many great franchises, it’s the supporting cast that really make the world pop. There’s Angelica, a 10-year-old pyromaniac who dreamt of being a drug lord before the world went up in flames at the hands of a “little dictator with a big ego” (no prizes for guessing the inspiration here), and the aptly-named Turbo Bro Jock who rules over his fellow athletes with an iron fist, submitting those unfortunate enough to cross him to a twisted game show called American Ninja Idol where there are no winners.

But the standout for us is Wesley Fists. Played here by the excellent Austin Crute, who you may remember for his scene-stealing turn as Alan in this year’s critically-acclaimed teen comedy Booksmart (if you haven’t seen it yet, add it to your list), Wesley is the bad-ass, sword-wielding hero that every comic book adaptation needs – and the character everyone will want to cosplay as for Comic Con next year. His newfound post-apocalyptic commitment to the Bushido Code is admirable, he’s a loyal ally to Josh and Angelica, and he even gets an origin story episode narrated by Wu-Tang Clan leader RZA. Everything about him oozes ‘cool’. But what makes Wesley truly great is that, while being all these things, he’s also gay. It challenges the old stereotypes that being queer means being weak or a victim.

“Growing up, I would’ve never thought that I would be gay on screen, much less gay and an action hero. That is just so crazy to me,” says Austin. “I would’ve thought it was forbidden fruit, like, ‘What? Two guys kissing!?’ I never thought this opportunity would come. I think it’s very important. I’ve always been in love with comic books – Marvel over DC, sorry y’all – I had action figures everywhere, I would draw my own characters and create my own worlds, so now that the protagonist is gay, that’s so dope. It’s so hard, and honestly y’all can’t say shit now! Y’all can’t say nothing. There’s a lot of people who are not with that gay shit who are about to be swinging swords like Wesley Fists, so I am very excited to see some, ‘Oh, oh, I’m straight, what are you talking about!?’-ass dudes swinging that sword around like Wesley. Aaand I’m making out with a straight guy on Netflix – shout out Cody Kearsley, we have a wonderful relationship and I love that man.”

Unlike many TV shows that feature queer characters, Daybreak doesn’t feature a big, emotional coming out moment. Wesley’s sexuality is hinted at when he’s taunted about his ‘secret’ – which turns out to be something else entirely – and when his sexuality is revealed to the viewer, it’s relayed in a matter-of-fact way towards the end of the second episode. “Everyone knows I’m gay. Wake up, nobody cares about that shit anymore,” says Wesley. And that’s all. Of course, coming out scenes on screen are important – almost every LGBTQ person will go through that moment in their lives, often multiple times, so it’s good to have a reference point or two – but representation of queer characters existing, and more importantly thriving, outside of the closet is arguably even more essential for young people coming to terms with their identity.

“I don’t think that gay characters or queer characters – or even people in real life – should have to announce their state of being,” Austin agrees. “Straight people don’t have to do that, I don’t think that queer people should have to do that, and I think it’s so great that we’re getting representation now for young people who are being able to grow up in a society where it doesn’t matter.” As a pastor’s son who attended school in the conservative state of Georgia, Austin knows what it means to have to put up a front to get by. “I had no openly gay or queer people around me growing up so it’s wonderful to be able to pave that way for representation of environments that are like that. Even though I was in drama and choir, I also had a lot of friends in basketball and soccer, so I would sit with them at lunch and how we would get on is not how the drama kids would get on,” he recalls. “I had to audition for both versions [pre-apocalypse and post-apocalypse] of Wesley and I just channeled that jock energy that I had to use being at high school to survive.”

Wesley isn’t the only queer character in Daybreak. Around the series’ halfway mark, his secret relationship with Turbo Bro Jock (played by Riverdale star Cody Kearsley) is revealed to viewers, as the setup for what seems like an epic showdown instead turns into a passionate embrace. “I was shook myself,” laughs Austin as he recalls the moment he read the script. It’s one of the show’s biggest twists, and sets up a major plot point that leads the show into more interesting territory. Despite being on different sides – Turbo is the leader of the beefed up sports players who make it their mission to kill Wesley’s newfound ally Josh – the two share intimate moments away from the battlefield, and Turbo is given more depth than the ‘dumb jock’ archetype he’s originally presented as. The romance is also fleshed out through numerous flashbacks, which attempt to explain Turbo’s daddy issues and his unhealthy possessive attitude towards Wesley.

“First of all, I was not expecting that whatsoever,” explains Austin. “I knew there was probably going to be a love interest at some point, I knew this character was probably queer because there was talk about his secret. But when that happened, I was like… ‘That’s just tea!’ Because honestly that does happen. I ain’t gonna call out no straight boys, but I’ve had many emotional flings – or technological flings – with ‘straight’ boys, and it’s just so funny that it hits that intensely every time. Every time I hear of an openly queer person with a closeted person, or even two closeted people going together under the radar, it just floors me every single time. It’s like, ‘Love finds a way!’ But that definitely floored me, I was not expecting that at all, and I was reinvigorated to discover this character and interact with Turbo in that way.”

An increase in diversity in the entertainment we consume is always something to be celebrated, but it’s important that such diversity is intersectional. When we do get queer representation in the media, it’s often only afforded to middle-class white gay men, who are almost treated as the ‘acceptable’ face of queerness. For many viewers, Daybreak will be the first time they’ll see a prominent queer black character played by a queer black actor on screen. It’s something Austin is acutely aware of, and he’s hoping that a mainstream, wide-reaching Netflix show presenting a black gay man being pursued by a white ‘jock’ gay – which society deems the pinnacle of the antiquated gay hierarchy – will help change perceptions of what is desirable or aspirational in the community.

“Most of the time, the ‘white gay’ is seen as the gay that you’re supposed to be, and now we’re moving away from that – even though I do think the power is still in the white gay favour,” says Austin. “I went to my first Pride this year, and I kissed my first boy like three years ago, so I’m pretty new to everything. But when I got into the business of boys, that was one of the first things that I noticed. It’s almost like because you’re black, people won’t dive into an interaction with you. I can literally see it all as it’s happening, y’all are exposed, naked in the flesh, I can see the gears turning in your head, and it’s just so interesting. Especially on the apps, you can literally look at one person’s app and look at another person’s app and see that their interactions are completely different. I’m deleting all of the apps before my birthday, I’m restarting. I didn’t even start using the apps until literally the beginning of this year, and it’s just interesting that there are generational things that go on and there are racial things that go on, and I think that seeing characters like this, for young black queer people… it has to happen! Especially a black dude that has the heart of the ‘straight passing’ white gay character. That’s a whole thing in itself.

“I for one, growing up, would have loved to have been the apple of a ‘straight passing’ white guy’s eye. Where I grew up in Georgia, my features were not hot, and the natural hair movement had just come into play – now we’re celebrating everything, but my look was not the look growing up, especially in a private Christian school where there was not a lot of representation for a queer… anything, really. This is a big step. We probably won’t even realise the contribution or impact that Wesley or Turbo or any other powerful queer character has made until years later.”

It’s refreshing to see a show truly treat being gay as ‘no big deal’ without erasing a character’s queerness, and one would hope that this is a reflection of modern society, but of course we know that’s simply not the reality for many young people around the world. Major cities like London and New York City offer more liberal havens for queer communities (although even they can be home to bigotry), but venture into middle England or rural America – not to mention the estimated 70 countries where being gay is still illegal – and the threat of violence or rejection is still rife.

“I think that any media representation of a world where openly queer kids can just live in peace like straight people is still idealistic in a way,” Austin continues, “but I think we’ve come to a time where it can at least be represented that way in the media. Because there was a time, up until very recently, where gay characters were just comic relief, or there was a lot of cross-dressing from straight people to be funny – and that’s cool, but now there’s more accurate representation of people actually living in this reality. Besides, if we don’t show people that it can happen, how is there gonna be any progress? Nobody was thinking about flying cars until somebody put it in a movie. Nobody was thinking about self-lacing shoes until somebody put it in a film.

Daybreak is available to stream on Netflix now.