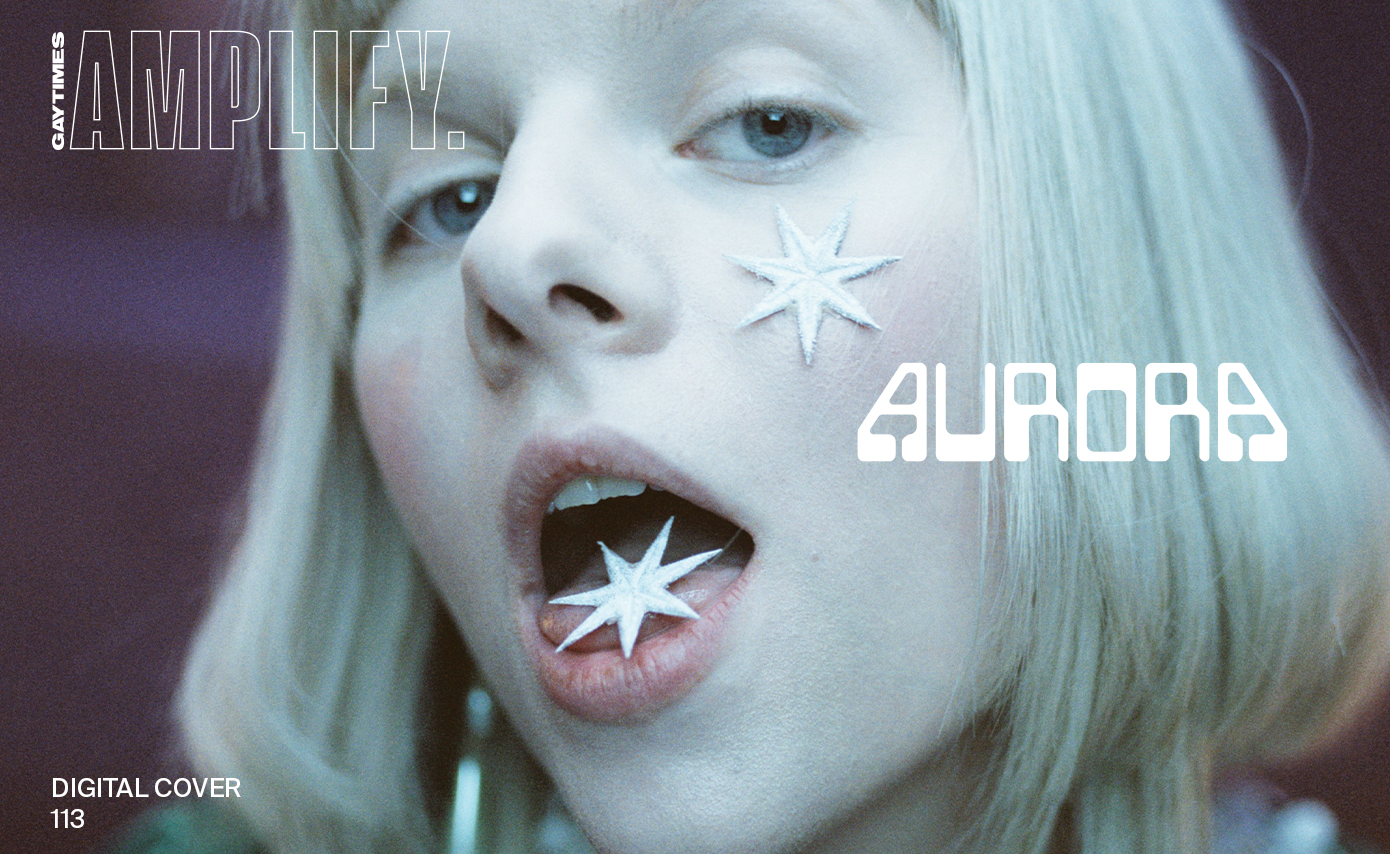 “I don’t need a cure for me / I don’t need it” sings Norwegian songwriter Aurora in her new unapologetic anthem of self-acceptance. Her lead single, Cure For Me, is a radical jaunty pop affirmation that dismisses the need for outside approval, with Aurora herself being known for dancing to her own beat. An unquestioned innovator, the 25-year-old is best recognised for gracing listeners with fantastical narratives and otherworldly musical creations. Out on 21 January, Aurora’s upcoming third studio album, The Gods We Can Touch, is an outwardly expressive project that we’ve come to expect from the star. The young artiste ponders divine entities, a myriad of Greek mythologies, and worshipping humanity in her latest work: “It would make more sense if we worshipped and respected ourselves and nature as much as people respect their God,” she muses over Zoom.

Entangled in a musical metaphysical world, Aurora boldly treads through topics of the first creation, religion, and mortality. Unswayed, the singer-songwriter draws the listener in with her candid confessions: “I want to live my life, be all of its pages / And underline that I am not an angel”. Here her attitude is committedly her own — a trait that colours her progressivism. In self-effacing bluntness, the musician shares another personal truth on the call; “I’m going to die and you’re gonna die, and the planet will still be here. I don’t know why I care so much, I just do”. At her core, the 25-year-old cares deeply about the Earth. Its ruin is something she describes as “too sad” to let happen. Despite the seemingly bleak situation, the star is hopeful. “Our generation wants to save the soul of humankind. I refuse to let her die in our hands,” she promises. “Fighting for the Earth is a fight for human rights, for women and against racism.”

In her late teens, Aurora came into the spotlight after her 2015 watershed hit Runaway went mainstream. Since then, the Scandinavian artist has become accustomed to the glare of attention. “As someone with a voice, I understand there is a certain pressure to use it,” she admits, reflecting on her experience growing up with fame. “I feel bad for young artists as I know how hard it is to use your voice in a world where it’s so easy to say something wrong and get hanged for it.” Now, a few years senior, the singer has been respectfully adjusting how she uses her platform. “I am always trying to find the balance between talking about things I know and about things that are not really about me like systemic racism or the rights of trans people,” she explains on the call. “In these situations, I am a privileged person, and it’s more about giving and offering space, instead of replacing people’s voices that need to be heard.” 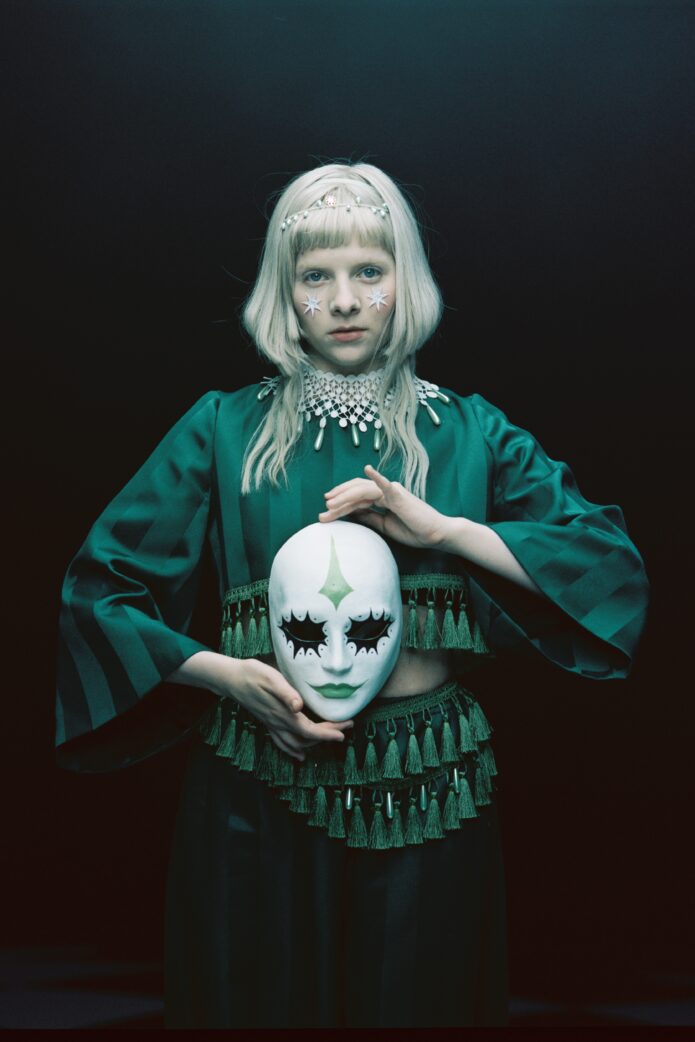 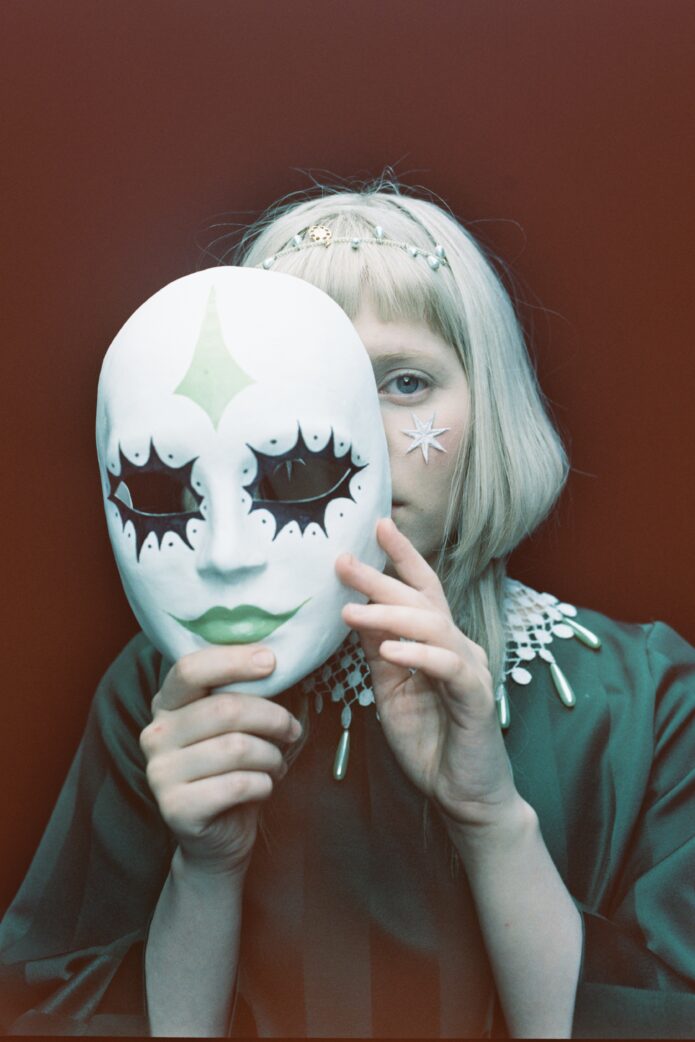 Now back in Norway, the star has been carving a space for herself online, especially on TikTok. Although admittedly weary of social media, labelling it “toxic”, Aurora has been reaching outward to create a “very safe” space where “people are only nice”. This unique universe of Aurora-based trends, song covers and scenic treks into the Norwegian landscape has become an online solace for many. Despite it being “a huge part of [my] job”, the artist realises how virtual living can be “so bad for our mental health” and steers away from it for the most part. When she is not ticking off label mandated posts or making friends online, the Conqueror singer takes time to reconnect with herself. “I get really affected by my surroundings so it’s been very special to write an album in Norway in peace and quiet,” she tells GAY TIMES. Recalling a two-hour boat trip to the ocean, Aurora found herself in southern Norway in the small province of Rosendal. In her eccentric style, the artist had decided to rent a small castle for a month where she wrote and recorded the album. “It has so much history and it felt really right making the album there,” she explains. “Making albums is my favourite thing to do in life. I’ve started my next album already. It’s been amazing to make an album from home. It’s a very playful album inspired by that urge of not being ashamed of wonderful things.”

Thinking back on her latest body of work, the singer pauses taking in her most recent progress; a whole new collection of tracks. “I have a few favourite moments,” she pauses. “I love when the music becomes an overwhelming wall of sound and emotion that hits you and you feel like dancing or screaming or running. The last track, A Little Place Called The Moon, is my favourite song from the album as it’s very spiritual”. Another poignant track bearing a lot of weight is Aurora’s single Cure For Me. The funky single came about as the artist began ruminating on the horrors of conversion therapy while on tour. “I was in Australia and about to go to Brazil, where I have a lot of gay fans. I sat down somewhere thinking about the world and love. I have gay fans all over the world, but especially in South America.” She acknowledges the country’s difficult political climate calling President Bolsonaro “the worst human in the world”. With her fans in mind, she continues: “I was thinking about conversion therapy and how many people have been through it. It’s still allowed in Norway, it’s not common, but it’s not forbidden. It’s heartbreaking, and I can’t imagine being told, again and again, every day, that who you are is so wrong and so terrible that you have to be cured. It’s just horrible.”

I was thinking about conversion therapy and how many people have been through it. It’s still allowed in Norway, it’s not common, but it’s not forbidden. It’s heartbreaking

With art at her disposal, Aurora channelled her anguish into music. “I was inspired by the gay, trans and drag communities. No matter how much the world is against them, they still manage to put out so much joy and colour and light,” she expanded. “You see this again and again in so many individuals that choose love over hate, despite the world constantly fighting against them. Sometimes they’re in danger, but they still put out so much light and love.” Paying homage to them, the singer explains how their determination and strength became an inspiration for Cure For Me. “I see so much of it, especially in the LGBTQIA+ community, and it’s just beautiful. So, I wanted to make a song that is inspired by that kind of joy and self-celebration. The best way to fight hatred is to let them know that it has no power over you.” 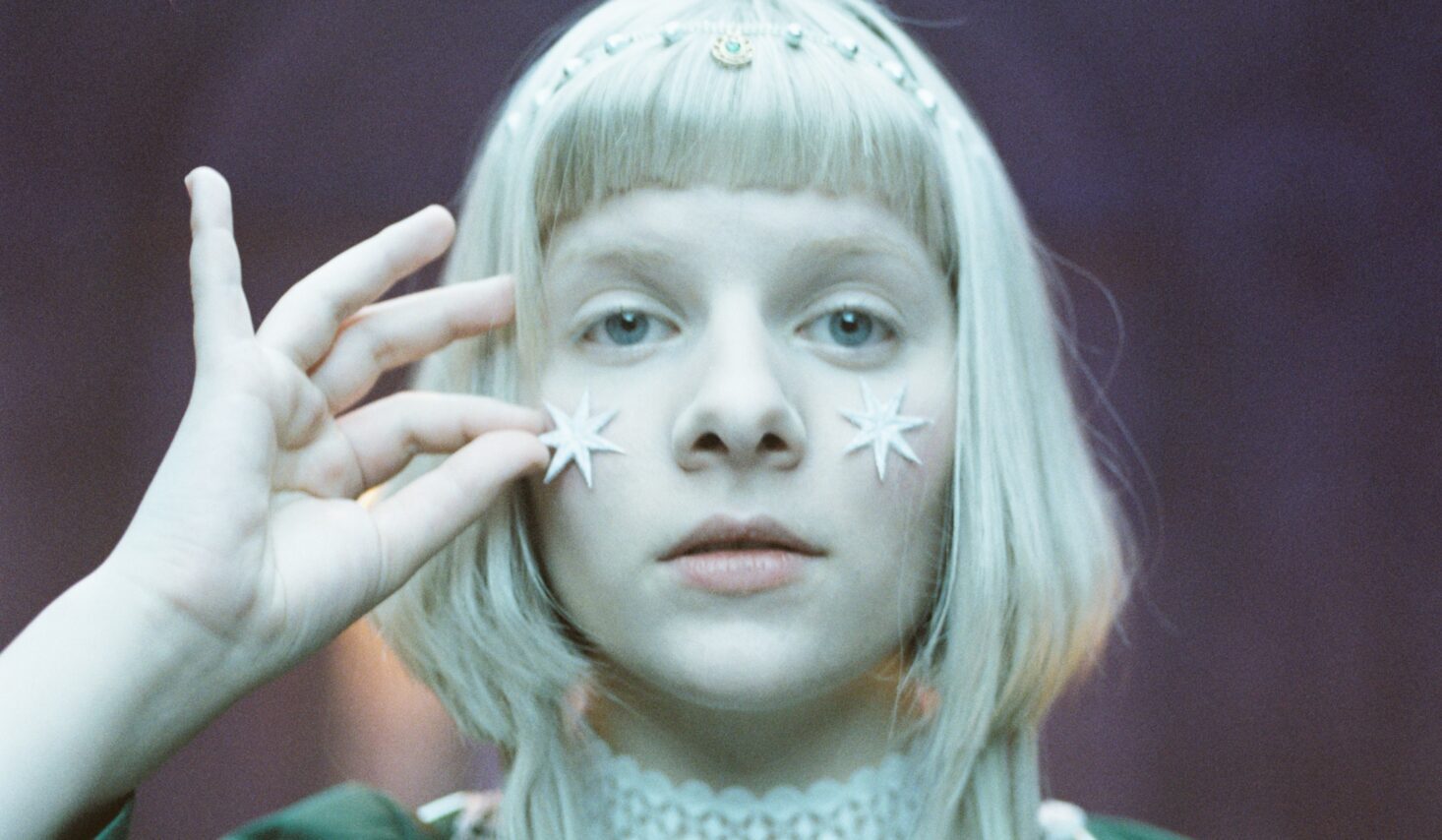 As the conversation continues to turn, the subject of anti-LGBTQ+ countries crops up. Nodding, Aurora smiles confessing she has been thinking about this herself. As a bisexual artist, the singer understands the tension between music and politics. “I would never want to generalise an individual for something they can’t control like the country they were born in. Removing art from a place where art is needed will not benefit the people you’re actually trying to reach out to in those countries,” she says. It’s clear empathy and compassion rule her judgement (and her cause). “When I go to these countries, I speak so loudly about love and the right to love, which of course can be a bit dangerous sometimes. Artists have to do what they’re comfortable with. It’s not right to split us apart and create even more boundaries. When you go to places to see your fans, talk about light, hope and love openly with them, that creates a spark. All progress needs hope because apathy is the enemy of progress.”

I was inspired by the gay, trans and drag communities. No matter how much the world is against them, they still manage to put out so much joy and colour and light

As sporting events take hold in anti-LGBTQ+ countries and as stars cancel shows in locations where politics clash with their political interests, Aurora is taking her own route.  “We should speak to our fans and not make them suffer because of their government. It just feels so unfair, especially with gay people in places like China, as it’s really dangerous for them there. It feels wrong to leave them,” she tells GAY TIMES. “The best thing to do is to go to them and talk. If I started cancelling countries then I couldn’t play anywhere, so where do you draw the line? I want to play for everyone.” Aurora’s stance is not surprising. In her single, Cure For Me, she repeatedly calls against the need for an antidote or cure for the community. “If you’re a member of the LGBTQIA+ community and you’re lost, all alone, you have no one to talk to and no one to open up to, imagine what a lifeline it is to have an artist come to your country and to feel that connection with them,” she continues. “I have so many songs dedicated to love and the right to love. We – the LGBTQIA+ community – don’t even have to say it, but we can all have a strong moment together. They can look around the room and see many people that are like them.”

Impassioned with support for the community, the singer wraps up her ode to her most marginalised fans: she hopes they can find their joy and “playfulness” in such a difficult time. “It’s going to be hard for many people when the world opens up again, so I want people to be kind to themselves and understand that it’s okay to be extra anxious these days.” As we all enter a new year, the singer looks ahead at new beginnings and fresh starts. “I feel a mix of uncertainness, but also euphoria. It’s going to be absolutely fantastic because we get to experience things for the first time again,” she says. “I want [readers] to play more with life and to feel better about themselves and their accomplishments. I want people to have more fun in life because we’re only here for a little while and then we’re gone forever. I want people to feel freer in their skin, in their lives, in their hearts, their minds and open up to each other more.”

Aurora’s The Gods We Can Touch will be out on 21 January and available on all streaming platforms via Decca. 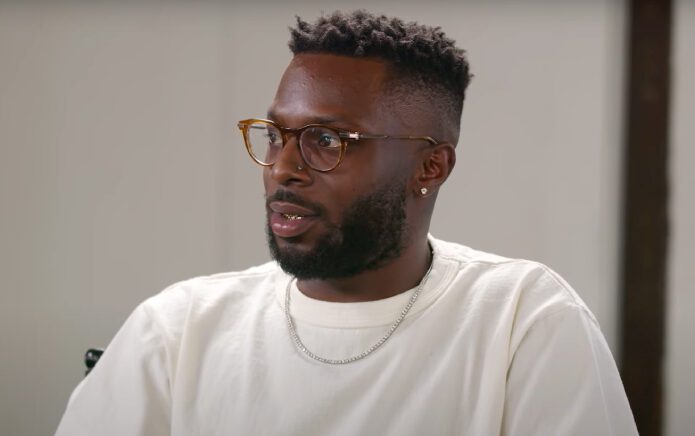 Isaiah Rashad comes out as sexually fluid: “I’m more attracted to a personality”

Isaiah Rashad has publicly come out as sexually fluid and addressed the leaked tape of him having intimate encounters with men. 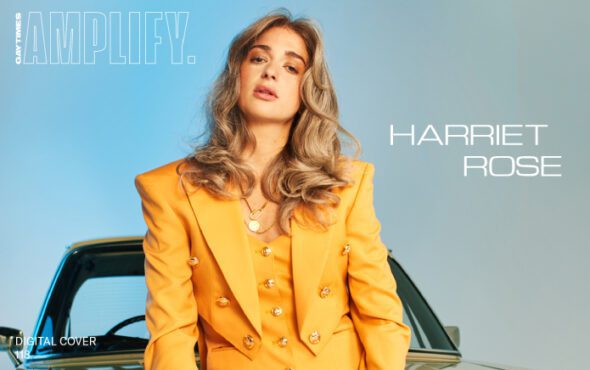