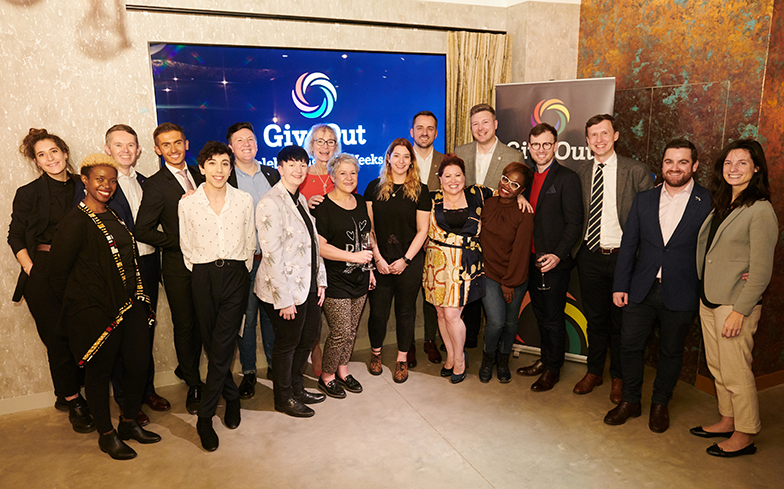 Often against the odds, LGBTQI activists around the world are defending our community and campaigning for equality, but they are woefully underfunded. Much less than 0.01 percent of international development aid focuses on LGBTQI human rights.

In fact, funding for LGBTQI rights in the Global South and East has decreased, all while the religious right pumps resources into protecting “traditional values”. This is why we launched GiveOut early last year, for our community here in the UK and elsewhere to help provide the resources that the global LGBTQI movement needs so urgently.

GiveOut is a UK charity that enables individuals and businesses to give in one place to support LGBTQI rights activism worldwide. We pool these donations and distribute them as grants to activist-led organisations around the world. We are proud to be working with a number of individuals in our community who sponsor funds with us to support the LGBTQI movement: Antonia and Andrea Belcher’s Trans Fund, Suki Sandhu’s LGBTQI Asia Fund and Steve Wardlaw’s Emerald 50 Fund for Southern Africa.

Earlier this year, we were excited to establish Amplifund, our new partnership with GAY TIMES to support LGBTQI media activism and campaigning globally. We have received donations and in-kind support from several businesses, including our founding corporate sponsors Boston Consulting Group and the events company Camm & Hooper.

For those individuals giving regularly, we launched the GiveOut 100 Circle last week at Camm & Hooper’s gorgeous Morton Society venue in central London, celebrating our first 100 weeks. We are working to harness the power of our community, pooling our resources in solidarity to provide long-term and sustainable support for LGBTQI human rights activism around the world – and we are already seeing impact.

By early next year, GiveOut’s supporters will have funded over £250,000 of grants to actvist organisations around the world, backing the struggle for LGBTQI human rights in the Caribbean, Europe, Middle East, Eastern Africa, Southern Africa, South Asia, Southeast Asia and the Pacific. In Jamaica, for example, our grant is enabling TransWave to build the trans movement and defend the community, with a new emergency fund for those at risk. We have also supported the launch of UCTRANS, the first Caribbean trans network.

“I remember the moment we opened the event, the first ever convening of only trans, non-binary and intersex activists in the Western Balkans and Turkey,” said Biljana Ginova, Equal Rights Association (ERA) for Western Balkans and Turkey. “When we told participants that the funding which made this possible came from a trans woman in the UK, Antonia Belcher, their faces changed. This money was coming from our community, and this had special value for us.”

In Iraq, GiveOut is supporting IraQueer, the country’s first LGBTQI organisation, which is educating the community and raising awareness with its podcast on LGBTQI rights that has so far reached 6 million listeners. In South Africa, our grant has enabled Access Chapter 2 to launch “Advocacy Week”, to train the new generation of LGBTQI activists.

And at the international level, we are proud to support the Kaleidoscope Trust, Commonwealth Equality Network and Outright Action International in their campaigning and advocacy work. The message from these groups is clear: it is not only the funding that is important but the source of this support – the LGBTQI community around the world standing shoulder to shoulder, in solidarity.

Thank you so much to everyone in our community who is already giving. For those who have yet to, we would love you to join us. To support the global struggle for LGBTQI human rights, donate to GiveOut here.

Rupert Abbott is the Executive Director of GiveOut (@GiveOut_Org), the award-winning charity growing giving to support the global struggle for LGBTQI human rights.