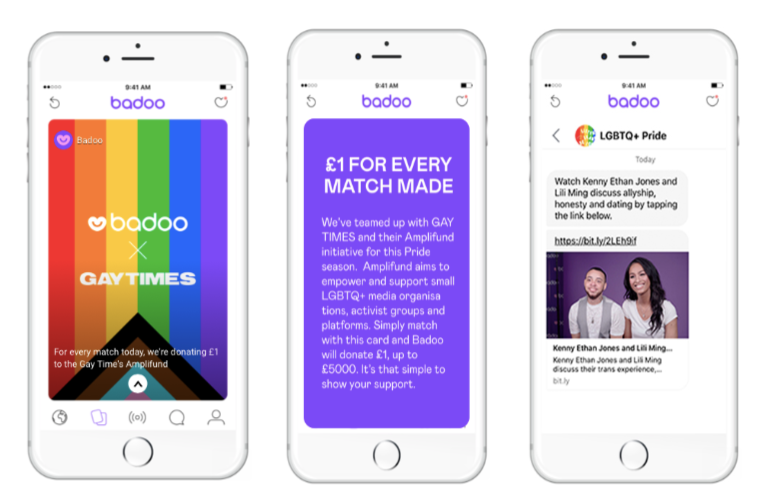 The partnership will help with Amplifund, which was launched by GAY TIMES last month.

Badoo and GAY TIMES have announced a new campaign, which aims to educate the 430 million users of the dating app on how to better be an LGBTQ ally.

An ally is any person that actively promotes and aspires to advance the culture of inclusion through intentional, positive and conscious efforts that benefit LGBTQ+ community members and people as a whole.

Badoo, which is part of the Magic Group which includes other dating apps like Bumble and Chappy, is the world’s largest dating app.

The campaign is aimed at non-LGBTQ users of the app, and has been called The Allyship Partnership. As part of the campaign, Badoo will donate £1 to Amplifund for every ‘swipe of support’ and will also include educational in-app cards.

The campaign is launching globally today, in countries like France, Spain, Brazil, Portugal, Thailand and parts of Africa.

As part of the campaign, Badoo interviewed trans activist Kenny Ethan Jones and Lili Ming. In a short video, they explained how straight people being an ally to the LGBTQ community can help benefit their lives.

Dominic Gallello, the chief marketing officer of Badoo, said: “We wanted to avoid suddenly trying to find our LGBTQ+ voice, we felt it was disingenuous and inauthentic.

“We are in a unique position to speak to non-LGBTQ+ people who can make a difference to the lives of millions of LGBTQ+ people around the world.

“We’re very thankful and proud to be working with GAY TIMES on this campaign, we implore more brands to start a dialogue with their audience centred on tolerance, honesty and inclusion – rather than painting rainbows on products.”

Tag Warner, the CEO of GAY TIMES, said: “Badoo understood its unique position and power to engage those who don’t identify within the community around important LGBTQ topics.

“We believe, in speaking to their audience, Badoo is addressing one of the most important factors in this mission to both LGBTQ and non-LGBTQ identifying people: education.

“GAY TIMES and Badoo have agreed as part of their work this Pride season, that they will donate the full campaign value to Amplifund. It’s vital that people who identify within the LGBTQ community have the opportunity and freedom to live their life without fear of discrimination or prejudice.”